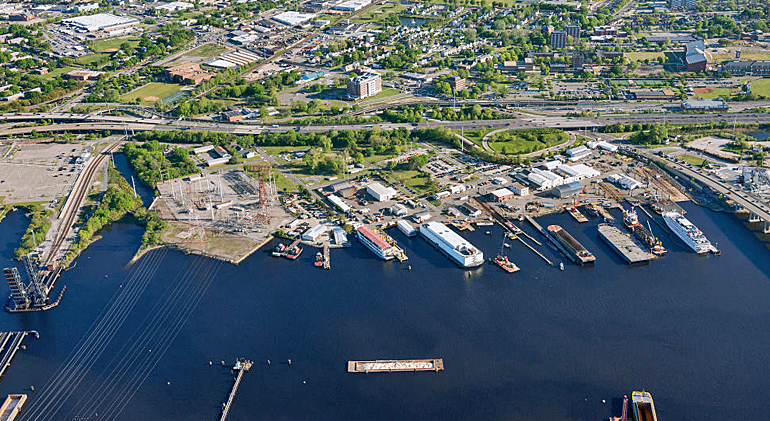 Consultancy firm Arcadis has been awarded a 11.6 million US dollar contract by the City of Norfolk, Virginia, to design stormwater infrastructure enhancements to protect Ohio Creek communities against future flooding and continued sea level rise.

The Arcadis-led design phase of the project will run through December 2018 with construction activities scheduled to begin in March 2019. 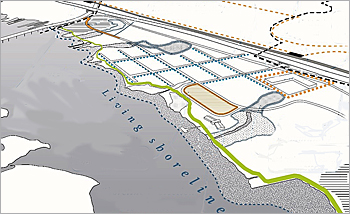 When major rain storms occur at high tide, the Elizabeth River spills into the stormwater drainage system and prevents rainfall from draining away from neighborhoods.

More natural water storage
A key element of the Arcadis resiliency planning approach is to blend the stormwater infrastructure into the aesthetics and landscape of the community while increasing resilience to future flooding.

Throughout the design phase, solutions will be introduced to manage excess stormwater rather than have it enter the drainage system, such as rain gardens, rain barrels, permeable pavements that soak up the water, and increased stormwater retention areas such as wetland habitats to naturally store stormwater.

People-focused goals
According to Scott Smith, Coastal Resiliency Manager for the City of Norfolk his city did not select Arcadis just because it’s staffed with experts who understand the flooding challenges and bring innovative and sustainable ideas to the table. ‘But also because they believe in what we are trying to accomplish — a resilient coastal community for the future.’

‘Our aligned vision and people-focused goals aim to develop a thriving, historic waterfront community that doesn’t just adapt to the risk of rising sea levels and changing climates, but learns to live with water for an improved quality of life’, said Smith. 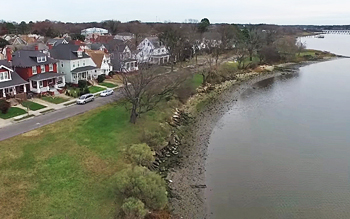 Model coastal city
‘The City of Norfolk is leading the charge to define innovative resiliency and adaptation by reinventing themselves as the model coastal city of the future’, said Arcadis Water President John McCarthy.

‘By applying our leading-edge techniques for water management, landscape architecture, flood protection and urban design, Arcadis is playing a key role in making this aspiration a reality.’

Urban fabric of the community
The city’s Office of Resilience selected Arcadis to design water management solutions that integrate into the urban fabric of the community, which may include the following:
● developing a heightened shoreline protection system to prevent high river waters from spilling into neighborhoods and flowing into the stormwater system.
● minimizing shoreline erosion by creating a living shoreline, using rock breakwater and vegetation to decrease wave energy during coastal flooding events while providing ecological habitat and recreational use, such as fishing.
● raising of several roadways to ensure access to the neighborhood during storms and to keep approximately 450 homes out of the path of flood waters.
● capturing and storage of rainfall via residential rain barrels and rain gardens to slow its flow to the stormwater system and subsequently reduce drainage system overflow and flooding.

The city received a 115 million US dollar grant to transform the Ohio Creek Watershed. The grant followed a winning application to the Department of Housing and Urban Development for funding through its 1 billion dollar National Disaster Resilience Competition. 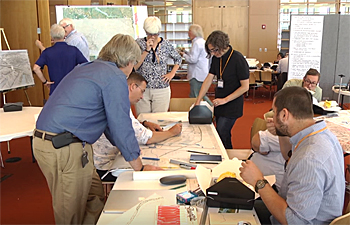 Dutch dialogue in June 2015 where Dutch and US experts talked about integrated solutions for flood risk mitigation in Norfolk.

Dutch dialogue
The application was inspired by the outcome of a Dutch dialogue that took place in June 2015 on the integrated mitigation of flood risks in the Tidewater District of Norfolk.

This workshop hosted a contingent of Dutch urban designers, engineers and architects for a week of in-depth immersion into flooding issues, meeting a wide variety of local engineers, officials and urban planners.

Other US cities
Arcadis has successfully undertaken several high-profile water management projects throughout the U.S., including the design of 2.4 miles of innovative flood protection for New York City, the comprehensive assessment of San Francisco’s Mission Creek and reducing the risks to communities in New Orleans against future hurricanes and severe weather events via an enhanced flood protection system.

Report by Norfolk TV on the Dutch dialogue that took place in Norfolk in June 2015 on a multi-faceted, multi-agency, multi-resource approach to life at sea level.