Over 20.000 people visited the four-day light show by Dutch artist Daan Roosegaarde in a flood plain area near Arnhem, the Netherlands. Waterlight created a virtual 'Northern Light' over the area, suggesting a river flood of 3 meters.

Visitors experienced the light show as walking under water, just beneath the water surface.

More awareness for water risk
Using the latest LED technology, Daan Roosegaarde presented his art as a dream landscape raising awareness about the power and poetry of water.

The artwork is the result of a collaboration between Studio Roosegaarde and the local Dutch water board Rhine and IJssel. "A combination of awareness and a dreamscape. By adding experience and perception, we created a virtual flood," Daan Roosegaarde said.

Waterlight will appear throughout the Netherlands in the coming years. 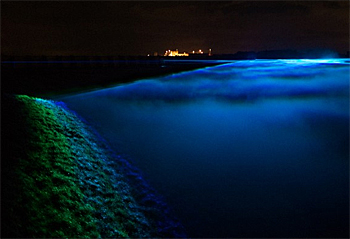 Laser lights created a virtual flood line against the dike.

Wavy lines of light
The artwork Waterlight consisted of wavy lines of laser lights across the flood plain. The lines were three meters high, so on top of the dike the visitors perceived the lines as high water, and once on the foreland visitors found themselves in an underwater world.

Chairman Hein Pieper of water board Rhine and IJssel: "In Waterlight people experienced what the Netherlands would look like without its dykes. Awareness is crucial, because the Dutch flood defences need every day maintenance and our national water awareness is the foundation of that maintenance."

Not dykes but consciousness is weak spot
"Not our dykes, but our water consciousness is the weak spot in our flood protection," Pieper says. He refers to the recent OECD assessment of the Dutch water management that concludes that Dutch flood defences are unparalleled by any other country, but that the risk awareness leaves a great deal to be desired.

The OECD assessment team was surprised to encounter an awareness gap among Dutch citizens in relation to flood risk and availability of fresh water. The perception of water risk is low and there is a high level of trust in the government.

According to the OECD there is a need to make the public more aware of what is needed to keep the country dry and habitable. It is important for people to understand the need for public investment in water security, the report notes. 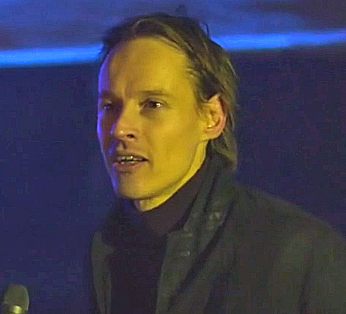 With projects ranging from fashion to architecture his interactive designs are tactile high-tech environments in which viewer and space become one. This connection, established between ideology and technology, results in what Roosegaarde calls 'techno-poetry'.

Roosegaarde won many awards and has been focus of exhibitions at Rijksmuseum Amsterdam, Tate Modern, National Museum in Tokyo, Victoria and Albert Museum, and various public spaces in Rotterdam and Hong Kong.