The new version of the Eco-Xbloc breakwater armour unit is covered with a layer of ecological concrete, which by its porosity and admixture stimulates the quick growth of marine life that stimulates marine life, improving flora and fauna diversity in the immediate surroundings of the breakwater.

XBloc is specially designed to interlock efficiently and withstand large wave forces. Units are applied around the world on breakwaters and shore protections. 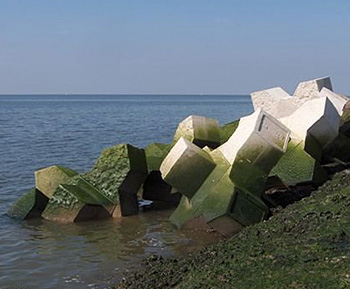 First version of the Eco-Xbloc with a roughened surface as placed on the IJmuiden breakwater in 2008.

Combination of wave protection and ecology
The new Eco-Xbloc is developed by BAM Infrastructure in cooperation with a partner who has specialised knowledge in the field of marine biology and stimulating marine life during the construction of marine structures.

Blocks like these can be applied in construction or maintenance of breakwaters to minimise the impact on marine life.

It has been observed that during maintenance to breakwaters with smooth concrete blocks there was little growth of seaweeds and shell fish to the new blocks.

As a consequence birds and other species who depend on these seaweeds and shells had difficulty to survive during and after the maintenance period. This new development aims to reduce this phase to a minimum and to provide a basis after that for a rich and varied marine life.

The blocks have been produced and will be placed by BAM Civil. In the coming months, BAM Infraconsult will monitor the blocks frequently in order to compare the ecological concrete with parts of the blocks which are made out of smooth conventional concrete.

More varied habitat
BAM-DMC started the development of an eco-friendly Xbloc with a roughened surface. Ten test Eco-XBlocs were place on the breakwater of IJmuiden in 2008. Monitoring showed that these roughened Eco-Xblocs provide a more varied habitat than conventional armour units (shaped like cubes).

The new placed Eco-Xblocs - with the porous layer - will also be monitored and the results will be compared to the previous version with the roughened surface.

This news item is originally published on the website of Xbloc.