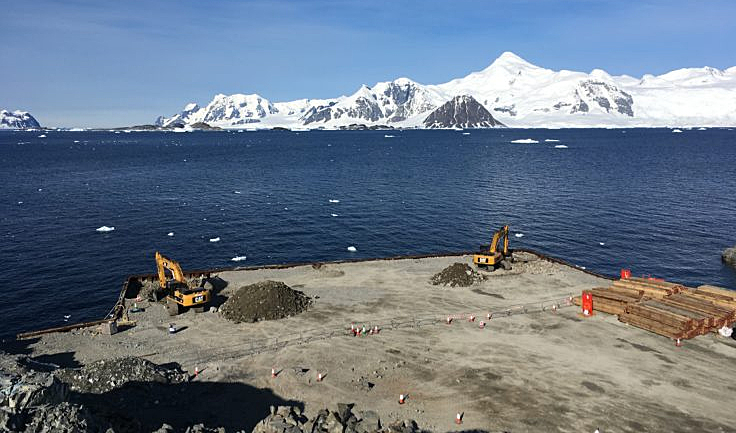 BAM Nuttall started the construction of a new 74 m long wharf at the Rothera research station on Antarctica, with the excavation work on the deconstruction of the old wharf.

BAM partners with British Antarctic Survey (BAS) to modernise this research facility and all 4,500 tonnes of steel and equipment for the build was recently shipped in from the UK abroard DS Wisconsin. 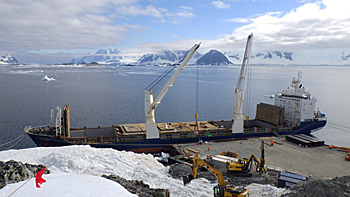 It took 11 days and nights to off load the construction materials that were shipped in from the UK aboard DS Wisconsin. Demolishing of the existing wharf (on top photo) that started last weekend.

It is due for completion in April 2020, and will provide safe berthing and efficient operations for the new polar research vessel the RRS Sir David Attenborough.

First spade in the ground
Whilst preparations for building a new wharf have been underway for two years, the first ‘spade in the ground’ moment occurred last weekend when two 35t excavators - operated by construction partner BAM Nuttall - broke through the surface of the old ‘Biscoe’ wharf.

The excavators will soon be swapped for two 90t long reach machines for the deep excavation and dismantling works. 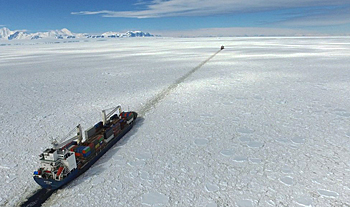 DS Wisconsin with the construction material making its way through the ice.

Crucial weeks ahead
BAS engineer and project manager David Seaton said: "Construction work in Antarctica is like nothing else, and it has taken a vast amount of planning, practicing and preparation to get us this far."

According to Seaton the next few weeks will be critical to the success of the project. "We hope to make good progress whilst we have long hours of daylight and relatively favourable weather conditions, knowing that in a few months when winter approaches, things are likely to get a lot more difficult."

BAM project manager Martha McGowan said: "The whole team is really pleased to have begun this exciting and important work. It is great to think that the wharf we are building will berth the world’s most famous research ship – the RRS Sir David Attenborough!" 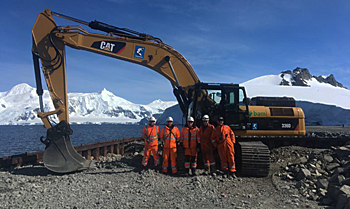 The first digging team at Rothera excavating the old wharf for deconstruction prior to the new one being built.

Assembly practised in the UK
Because of the practical restrictions of working in one of the most remote construction sites in the world, the construction team practiced full-scale assembly of the new wharf in Southampton in the UK before deployment.

This made it possible to identify unexpected challenges or additional pieces of equipment needed in the UK, rather than once everything had been shipped 11,000 km to Rothera.

The cargo ship DS Wisconsin, loaded with 4,500 tonnes of steel and equipment for the build, arrived at Rothera on 28th December. Teams worked around the clock to unload her, which took a full 11 days and nights.

This news item was originally published on the website of British Antarctic Survey (BAS).