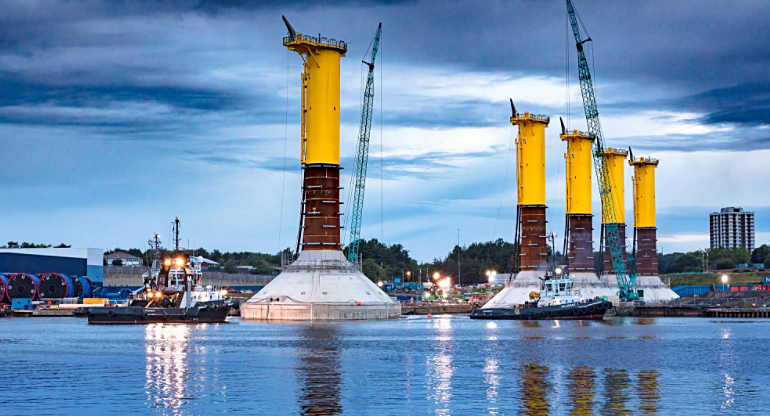 The first of five floatable wind turbine foundations has left its construction dock on the Tyne river on route to its final destination, the Blyth wind farm on the North Sea.

The foundation left the Neptune dry dock on 11 July. It is designed and build by Royal BAM Group and the technology has been developed in close cooperation with Van Oord. 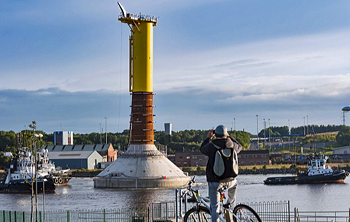 The first concrete gravity based foundation (GBF) on its way to the North Sea.

Five wind turbines
Over the past 12 months BAM Nutall has been constructing the five 60 meters high concrete structures. Each GBF is made up of more than 1,800 m3 of concrete and weighs over 15,000 tonnes when fully installed on the seabed of the wind park.

EDF Energy Renewables is building the Blyth Offshore Demonstrator wind farm that will see five MHI Vestas V164 wind turbines with a total generating capacity of 41.5 MW installed, some 6,5 km off the coast of Blyth, near Newcastle, UK.

Once the GBFs are put into position over the summer, specialist contractor VBMS will start laying the inter array cables that will connect the individual wind turbines. 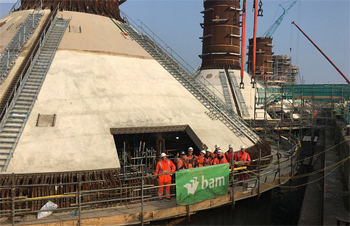 Dry dock Neptune along the Tyne river where all five GBFs are being build by BAM.

‘The GBFs are held in place by gravity and this unique design reduces the need to use expensive marine equipment for the installation on the sea bed’, Hue added.

Engineering excellence
Divisional Director at BAM Nuttall Scotland and the North of England, Gareth Farrier said: ‘Bam Nuttall and the wider BAM group are delighted to be supporting EDF Energy Renewables on this demonstrator project, through both the opportunity to deliver innovation and engineering excellence in overcoming the many design and construction challenges.’

This news item was originally published on the website of EDF Energy Renewables.