The contract value is 346 million euro. The construction period is expected to be seven years. 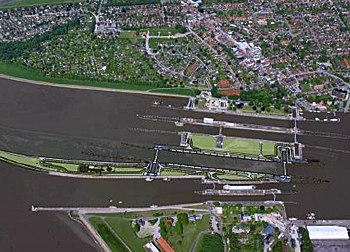 New lock will be situated on the current island in between the four existing locks.

Additional lock
The project includes the construction of a 360 meter long sea lock between the Elbe and the Kiel Canal and the adjustment of the entrance of the harbour on the Elbe side.

The construction of the fifth lock is essential for the necessary renovation of the century-old lock complex at Brunsbüttel.

It ensures also smooth navigation on the busy Kiel Canal that connects German ports on the North Sea with the Baltic Sea.

This news item was originally published on the website of BAM.