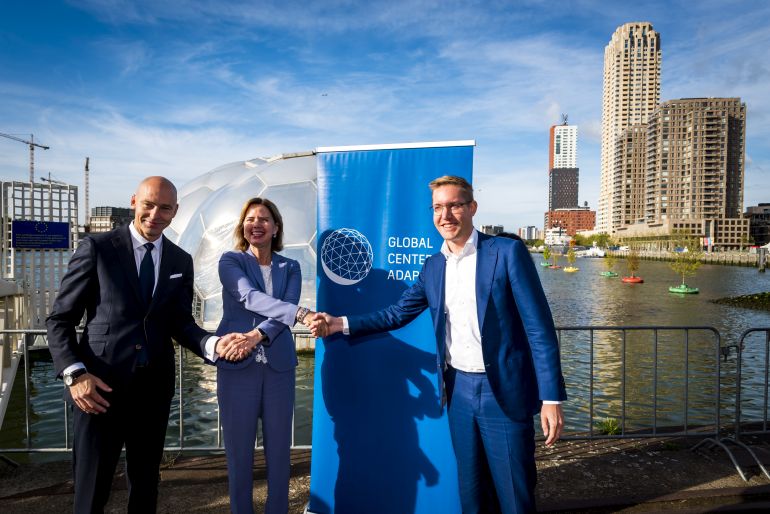 The Global Center on Adaptation will be overseen by Ban Ki-Moon (former Secretary-General of the United Nations), Bill Gates (co-chair of the Bill & Melinda Gates Foundation), and Kristalina Georgieva (CEO of World Bank).

The names of three board members of the expert center on climate adaptation were announced by Dutch minister Cora van Nieuwenhuizen of Infrastructure and Water management, when initiating the construction of the centre’s floating building in the harbour of Rotterdam, the Netherlands.

The Global Center is to catalyse a global adaptation movement and accelerating action. 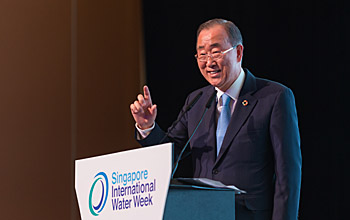 Ban Ki-Moon addressed the global water community at the Singapore International Water Week in July, urging for innovation to achieve SDG#6 on water by 2030. (photo: SIWW)

Accelerate transformation
Former Secretary-General Ban Ki-Moon, who will serve as Chairman of the Board of the Global Center, said that ‘the role of Global Center on Adaptation will be significant because we need all societies to learn from one another.’

He noted that “under the exemplary and bold leadership of Patrick Verkooijen, the Global Center will help accelerate adaptation transformation at scale and at speed.'

Solution broker
Patrick Verkooijen, who has accepted the role of Chief Executive Officer of the Global Center, said that as part of its next chapter, the center will work to support the recommendations of the Commission while pursuing pragmatic steps that can help address policies, investments, financing, and governance needed for increased adaptation action globally.

‘We will act as a solutions broker,’ Verkooijen said, ‘bringing together governments, the private sector, civil society, intergovernmental bodies, and knowledge institutions to address the obstacles slowing down adaptation action.’

This news item was originally published on the website of Global Center on Adaptation.