Battle of the beach: Astonished kids saw how the sea devastated their sand castles 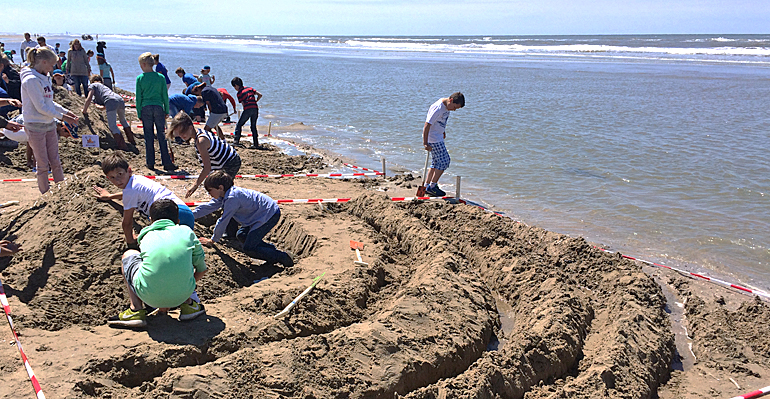 Dutch school kids from eigth primary schools participated in the second edition of the Battle of the Beach on the North Sea beach near Noordwijk, the Netherlands on 16 June.

The kids were tasked not to build the most beautiful sand castle, but the most resilient sand castle. It was the castle built by the team of primary school Vliermeent from The Hague, that was the last one to stand up against the tide.

The competition is organised by the Dutch water authorities to give children the experience of how important it is for the Netherlands to strengthen and maintain its flood defences. 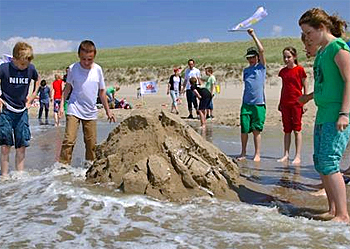 With astonishment the children saw their sand castles disappear in the sea.

Last to go down
The teams had one hour to build a sand castle strong enough to stand up to the tide. When the tide came in, the castles vanished one by one and the last one to go down was from the team from the Vliermeent school.

All kids were visibly impressed by the force of the waves that finally devastated all castles.

Raise awareness
Dike expert Goaitske de Vries of Deltares attended the event in her role as ambassador for the Dutch campaign "Water Wonderen" aimed at stimulating young students to choose for a career in the water sector. De Vries mentions the importance of safety awareness. 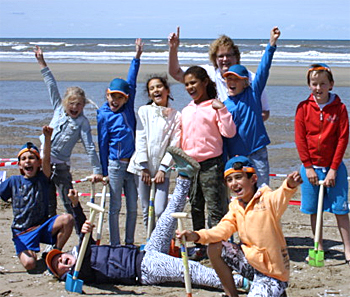 Winning team of the Vliermeent primary school from The Hague, with Goaitske de Vries of Deltares in the background.

"Children are not always aware of what it takes to stay safe from water. Therefore it is not very obvious what the dangers are, certainly not in the Netherlands. I thought it was a great experience to contribute to that awareness", says De Vries.

De Vries noticed that this year the children focused more on the fortification of their castle, compared to last year. "The teams had clear ideas on how to build a strong sand sculpture, rather than on a creative shape. Some teams built even dikes around their castle."

Sport and education
The Battle of the Beach is organised for children to realise the importance for the Netherlands to defend itself against water. Prior to the competition on the beach, guest lectures were held at all participating schools.