Battle of the beach: Few minutes for sea to destroy all 125 passionately built sand castles, the Netherlands 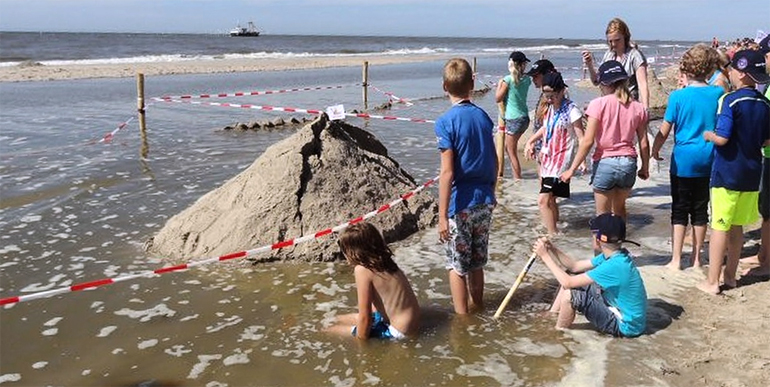 It took the sea only 20 minutes to wash away all 125 sand castles that Dutch school kids had passionately built on the beach at four locations along the Dutch North Sea coast on 4 July.

Some 1,100 kids from primary schools participated in the third edition of the Battle of the Beach. They were challenged to build a sand castle to withstand the upcoming tide as long as possible.

The shape of the sculpture did not matter, it was the resistance against the invading sea that counted. So many children fortified their sand castle by surrounding it with ditches. However, that proved not very effective.

The Battle of the Beach challenge is organized every year to generate more awareness for flood protection in the Netherlands, especially amongst the younger generation. 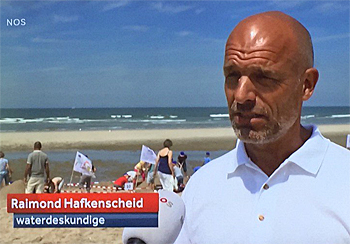 More participating school kids
New for the third edition was the fact that the event took place simultaneously at four different locations along the Dutch North Sea coast. The previous editions were at one location only.

“For this edition we have been able to raise the number of participating teams fourfold”, says initiator and coordinator Raimond Hafkenscheid.

Hafkenscheid looks back on a very successful edition, held on a day with perfect beach weather. “One day we want to establish a world record but then we need much more teams”, he continues.

For this reason he also invites school teams from abroad to participate and make next year's edition truly international. 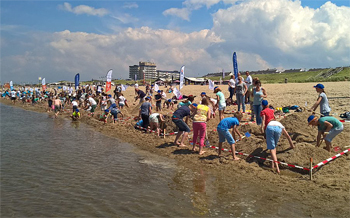 The battle is on at location Kijkduin, near The Hague.

Guest lectures at schools
Participation in the Battle of the beach challenge starts with a guest lecture at the primary school by a water expert of the local water authority. On the day of the event the school teams are given marked plots on the beach and they have one hour to build their sand castles with a flag on top. Then the tides comes in, destroying all sand castles. The one with the last remaining flag is the winner.

According to Hafkenscheid the school kids respond very enthusiastically. Especially the day on the beach. “Out on the beach, they learn so much more on flood protection than in their classroom", continues Hafkenscheid. "Some have never been on the beach before. One kid asked me how the sea was supposed to destroy his castle with the water so far away. It turned out he had never realised the effects of an incoming tide on the beach”. 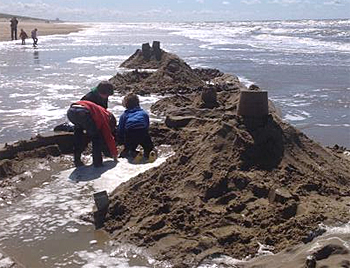 The sea levels the sand on the beach again as it always does with every new tide....

Destroyed in twenty minutes
Although it was Hafkenscheid’s third event, he was again surprised by the power of the sea. “At a certain moment we began to ask ourselves if we had not located the plots too far up the beach. But then the tide starts to rise, the waves roll in and then the water arrives at the foot of the castles. From that moment, it is only 20 minutes later that all castles have disappeared. This shows the force of the water.”

The secret of a strong sand castle remains unrevealed. "It is certainly not the ditches around the mound", Hafkenscheid gives away. "It has to do with the height of the mound and where to put the flag".

Read also on this website
● Battle of the beach: Astonished kids saw how the sea devastated their sand castles

The thrilling final minutes at beach location Kijkduin with the winning team from Regenboogschool in Naaldwijk, the Netherlands.