Dutch minister Melanie Schultz van Haegen of Infrastructure and Environment and the Flemish minister Ben Weyts of Mobility and Public Works have signed an agreement for the construction of a new sea lock at Terneuzen, the Netherlands on 5 February.

The new lock will be located at the existing lock complex in Terneuzen at the entrance of the Gent-Terneuzen canal that connects the inland port of Ghent, Belgium.

The new lock will be of the same size as the new locks of the Panama canal. The construction is expected to cost 920 million euro. 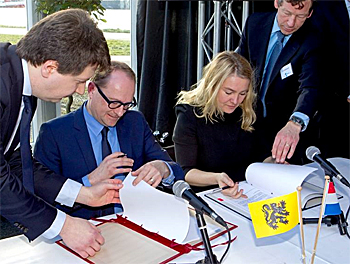 Dutch minister Schultz: "This cross-border project fits perfectly the ambition of our national Maritime Strategy that I recently sent to parliament. With this project we strengthen the competitiveness of the Dutch maritime industry in Northwest Europe for both inland and maritime ports. I am very pleased that we have reached this agreement. "

Flemish minister Weyts: "The realization of this new lock is one of the priorities of the Flemish coalition. We want to ensure the accessibility of the Flemish maritime ports. This agreement is a crucial next step to realize the New Lock Terneuzen. " 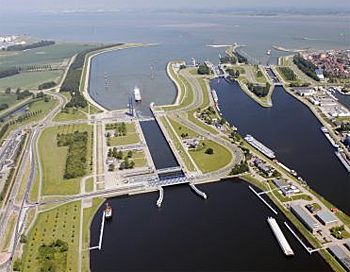 Impression of new lock (centre) to be situated next to the current complex (top right).

Post-Panama sized vessels
New Lock Terneuzen will be as big as the new Panama Canal locks currently under construction. The lock chamber will be 16.44 m deep, 55 m wide and 427 m long.

The construction costs of the lock are estimated at 930 million euro. Maintenance is expected to cost 75 million euro annually for a period of 30 years.

Because of bigger tonnage allowance, the canal will need considerable adjustments in due time. The Netherlands agreed to contribute some 150 million euro, consequently Flanders-Belgium will contribute the rest of the total amount.

Both Flemish and Dutch parliaments still have to approve the agreement. Meanwhile preparations will continue for a start-up of the work in 2017. The new lock is expected to be operational in 2021.

National replacement programme
The Dutch ministry of Infrastructure and Environment has planned a series of five new locks to be contracted on basis of Design Build Finance Maintain (DBFM). Rijkswaterstaat, the public contracting authority, awarded the first concession in December 2014.

Belgian constructor Besix won the concession to build a new lock at Limmel, on the Juliana canal in Southern Netherlands and will operate the lock for 34 years.

In December last year, the Dutch ministry of infrastructure and environment also signed an administrative agreement on the construction of a larger new sea lock at IJmuiden that connects the inland port of Amsterdam. The involved authorities agreed on financing the project for 762 million euro.

This news item is based on the press release by the Port of Ghent, Portaal van Vlaanderen (Dutch only) and Dutch ministry of infrastructure and environment (Dutch only).

More information
Ministry of infrastructure and environment
The Hague, the Netherlands
+31 70 456 00 00
www.government.nl/ministries/ienm