Belgian water supply company De Watergroep is the first foreign shareholder of the Dutch national scientific research programme on drinking water. This research programme Bedrijfstakonderzoek (BTO) is supervised by KWH Water of which De WaterGroep has now officially become a shareholder. Representatives of De Watergroep and KWH Water, in the presence of the Flemish Prime Minister Geert Bourgeois and the Dutch minister Lilianne Ploumen, signed the accession agreement on 29 November. 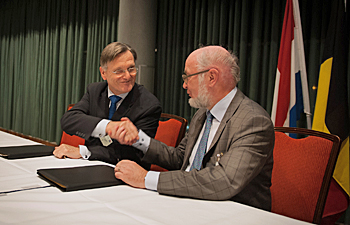 Largest Belgian water company
As a launching customer of new water knowledge in Flanders and as the largest drinking water company in Belgium, De Watergroep is an important source of knowledge for the Flemish-Dutch collaboration.

Conversely, the shareholdership in KWH Water is of interest to De Watergroep because of the joint knowledge development, the high scientific quality of the research, and the links with international organisations and networks.

Highly specialised knowledge
For instance, the Dutch research institute KWR, is a Collaborating Centre of the World Health Organization (WHO), is represented on the board of a number of international water networks (GWRC, WssTP), and is very active in the European Innovation Partnership (EIP) Water.

Moreover, KWR disposes highly specialised knowledge and facilities, and functions as an emergency laboratory for the (drinking) water sector. 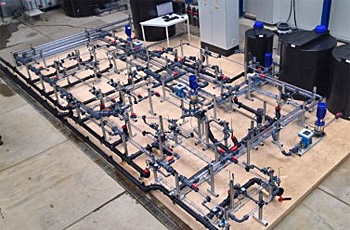 A recent BTO research project involved this scale model of the drinking water distribution network of the whole city of Leeuwarden, the Netherlands.

Joint Flemish-Dutch R&D
For De Watergroep accession to KWH Water fits in with its stronger focus on research & development.

With its shareholdership De Watergroep wants to promote the collaboration between the Flemish and Dutch research communities. In this connection, researchers from several Flemish top universities will be brought into BTO research projects.

About KWH Water
The joint research programme (BTO) for Dutch water companies is formally supervised by KWH Water and involves end-users, such as water companies, constitute powerful and enduring pillars in the water sector, and strives for a drinking water provision that is healthy, sustainable, efficient and advanced.

Every year some hundred projects are carried out, divided over areas such as exploratory research, thematic research, tailored research and networking.

The Dutch government and the European Commission share the water sector’s desire to direct resources efficiently to water cycle research.

The Dutch water companies and KWR have been investing in this effort for more than forty years.