BIG and One Architecture awarded for Manhattan's flood protection ribbon

BIG team, led by BIG and One Architecture, has been honored with the bronze price of the LafargeHolcim Awards, the most significant international competition for sustainable design and construction.

The Dutch-Danish-US consortium received the Global Award for sustainable construction for their Dryline project that addresses New York City’s vulnerability to coastal flooding with a protective ribbon in Southern Manhattan.

The award was handed out to the winning team (see top photo) in New York, USA on 24 September. 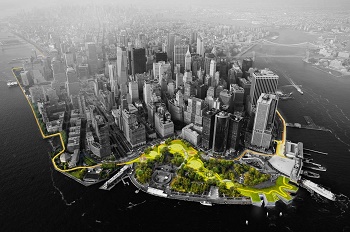 Design proposal for a flood protection 'ribbon' around Manhattan.

Rebuilding by design
The Dryline project origines from the Rebuild by Design competition, an initiative that challenged design teams from all over the world to develop new ways to rebuild the hard hit region of New York after superstorm Sandy in 2012.

Dryline is a vision for flood protection of the 10 miles long waterfront around Southern Manhattan that comprise an incredibly dense, vibrant, and vulnerable urban area.

The Dryline consists of multiple but linked design opportunities; each on different scales of time, size and investment; each local neighborhood tailoring its own set of programs, functions, and opportunities. Small, relatively simple projects maintain the resiliency investment momentum post-Sandy, while setting in motion the longer-term solutions that will be necessary in the future. 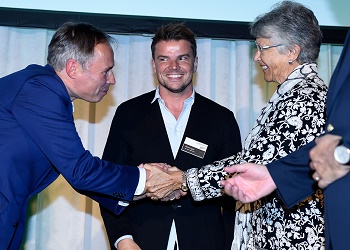 She enthusiastically commended the project for making a political statement by means of an architectural and urban proposition that demonstrates how the future challenges of sustainability can be a mechanism for enhancing our cities.

"The jury had a difficult task with many high quality submissions, but could clearly see The Dryline’s potential as a model to be applied in susceptible regions around the globe, especially in regions with limited economic resources," she said.

Multifaceted problem-solving
Mohsen Mostafavi, Dean of the Harvard Graduate School of Design and also member of the jury, commented on the scope of the project and its multifaceted problem-solving approach. "This is a bold proposition to tackle future challenges by means of a construction that offers a multiple value to society – turning a problem into an opportunity. The Dryline makes an outstanding contribution in terms of risk and resilience, and was selected out of more than 6,000 submissions from all continents to receive one of the top three global prizes", he said.

Reclaiming the waterfront
After Superstorm Sandy in 2012, New York City proposed a series of investments in Southern Manhattan, described as integrated flood protection, that would reduce the risk of flooding and integrate into the neighborhood fabric.

In collaboration with the City, The Big U consortium proposed a continuous line of protection, broken up into three compartments, with each compartment shaped by the communities and stakeholders it was intended to protect.

The project was one of six design proposals to address vulnerabilities exposed by Hurricane Sandy that was selected by the US Department of Housing & Urban Development (HUD) Rebuild by Design competition in 2014.

The US Department of Housing & Urban Development (HUD) allocated 920 million US dollar to New York, New Jersey, and New York City to begin implementation of the winning projects. Specific to the city of New York 335 million US dollar was awarded for the realization of one of the three compartments described in the Big U proposal.

This news item was originally published on the website of LafargeHolcim foundation.

One Architecture
Amsterdam, the Netherlands
+31 20 470 0040
www.onearchitecture.nl

Video impression of the Dryline project