Biggest icon project of Room for the River programme officially commissioned at Nijmegen, the Netherlands 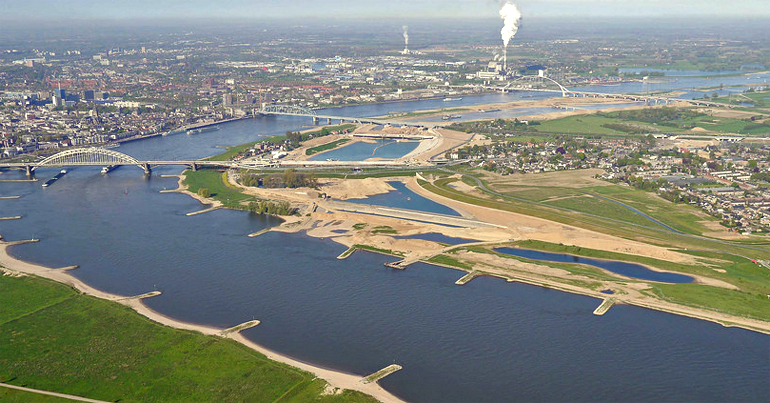 Levees have been moved 350 meters inland, a 3,5 km-long flood relief channel has been dug, and three new bridges connect the banks on both sides the Waal, the main distributary branch of river Rhine flowing through the Netherlands.

The river flood protection project not only takes out the narrow bottleneck at the city of Nijmegen, it also created an island park connecting both sides of the river. This combination makes the project the most iconic of the all river widening projects in the Room of the river programme.

By pulling a life-size thumb out of a levee Dutch minister Melanie Schultz van Haegen of Infrastructure and environment, and mayor Hubert Bruls of Nijmegen, officially commissioned the river flood protection project on 3 December.

For the construction of the parallel channel and the creation of the island nearly 5 million cubic meters of sand was excavated. The costs of the project was 351 million euro.

The river project was realised by the I-Lent consortium consisting of constructor companies Dura Vermeer Infra division and Ploegam. 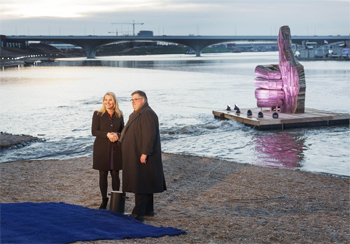 Clearly inspired by the story of Hansje Brinker with the finger in the dike, the opening ceremony included the pull out of a life-size thumb by Dutch minister Schultz van Haegen (left) and mayor Bruls.

The Dutch national water authority Rijkswaterstaat is anticipating higher extreme river discharges in the future. Instead of raising the levees, it opted for widening the river Rhine at some 30 locations.

The project that has now been completed and the city of Nijmegen is one of the largest and most inspiring of this Room for the River programme.

Hand in hand with urban quality
Minister Melanie Schultz van Haegen: "A unique urban river park has been created in Nijmegen: the secondary channel and the island are part of a plan in which flood risk management and urban quality go hand in hand. In the 1995 flooding, Nijmegen residents were up to their neck in water. Now, the Waal can cope with a similar volume of water with no problem at all. Nijmegen is prepared for future high water levels caused by climate change." 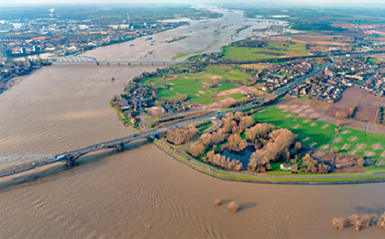 Old situation with city centre at the left. (photo by DAPh) 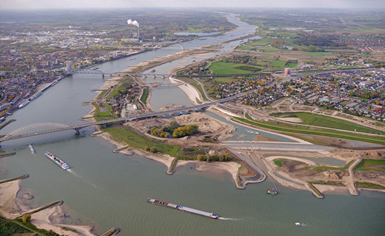 Situation just before completion of the river widening. (photo by Aeropicture)

River park
The project have been carried out in a manner that ensures it adds value to the city in other ways then just flood risk reduction. A new quay forms the beating heart of the river park.

Mayor Hubert Bruls: "Here, we have turned a danger into an opportunity. With this project Nijmegen has acquired an additional, very special recreational area just a stone’s throw from the city centre."

City to embrace the river
The initial plans for widening the river at Nijmegen were locally opposed, as it included the demolishing of around 50 houses.

Also the city of Nijmegen was very sceptical at the start. However, by integrating the flood protection plan in a wider urban development plan the municipality got interested.

Many talks with the local people and the municipality lead to a more comprehensive plan that impacted the city´s existing development plans.

The city is mainly located on the south bank of the river and the new plan envisioned an expansion to the other side of the river.

By extention of the city centre to the other bank, the river will run through the city, instead of along it.

The programme has two objectives. By giving the Rhine river more room its discharge capacity will rise from 15.000 m3/s to 16.000 m3/s. Additionally the projects will improve the spatial quality as well, making the river also economic and environmental more vital.

This news item is based on a press release by the Dutch government.