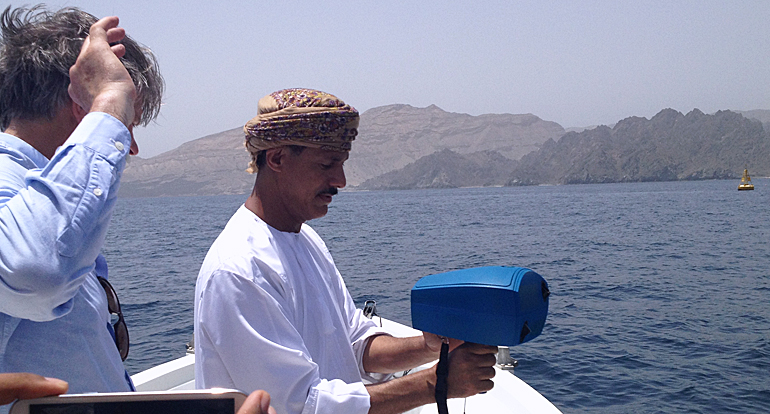 During a visit to the Ministry of Fisheries of the Sultanate of Oman, BlueLeg Monitor demonstrated the hand held WISP algae monitor at various locations. Several experts of the Aquaculture Centre were introduced to the operational use of the WISP and in-depth discussions were held on the applications of the WISP in Omani circumstances.

The experts were impressed by the ease of use of the WISP for the identification of Chlorophyl-a, coloured dissolved organic matter (CDOM), and water transparency  on a real time basis.

The Omani ecological system and its economy in recent years have suffered from regular occurrence of Hazardous Algal Blooms in the Gulf of Oman and the Arabian Sea.

Harmful algal blooms in Gulf
Harmful algal blooms (HABs), in this case caused by the dinoﬂagellate Cochlodinium polykrikoides are responsible for mass mortalities of wild and farmed ﬁsh worldwide, with catastrophic impacts to aquaculture and local economies.

The severe and widespread outbreak of HABs in the Arabian Gulf and Gulf of Oman lasted for more than eight months and killed thousands of tons of ﬁsh, limited traditional ﬁsheries operations, damaged coral reefs, impacted coastal tourism, and forced the closure of desalination plants in the region.

Threat to drinking water supply
The mechanisms underlying this expansion of HABs include increased nutrient enrichment of coastal waters in the Arabian Gulf and Gulf of Oman from domestic and industrial inputs, natural meteorological and oceanographic circumstances, and the recent introduction of this species through ballast water discharge.

As Arabian Gulf countries rely on desalination plants as the primary source of freshwater, the disruption of plant operations by recurring Cochlodinium blooms poses a serious threat to the drinking water supply in the region, and represents an unprecedented HAB impact. 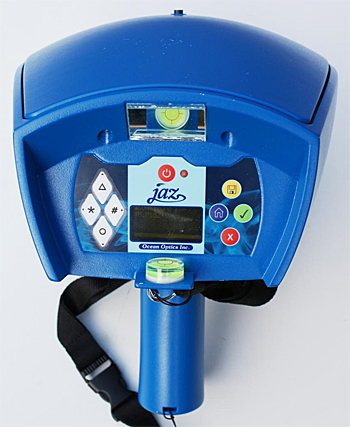 About WISP
The WISP-3  makes on-the-spot images of the surface water to be monitored and converts these images into concentrations of:
•  Chlorophyll as proxy for algal biomass;
•  Phycocyanin as proxy for cyanobacterial biomass;
•  suspended sediments (TSM);
•  Coloured Dissolved Organic Matter (CDOM) (after additional processing via  portal)

The data generated by the WISP can be read directly from a LED display at the device, are near real time and are automatically introduced into WISP-web, a website which is automatically processing the observations and storing the data into the required format for reporting,

This news item was originally published on the website of BlueLeg Monitor.