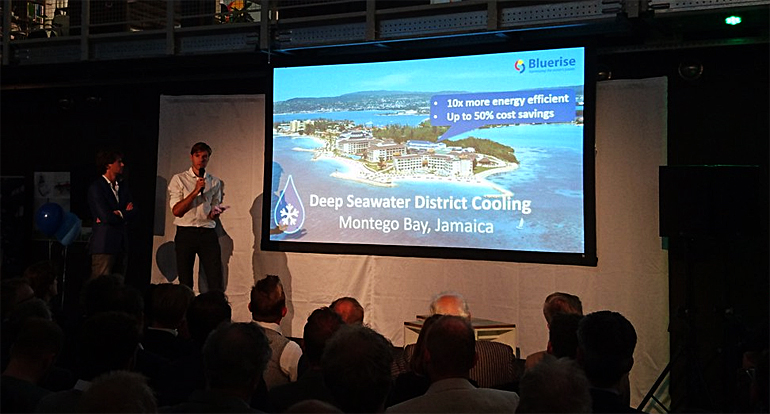 At this moment the crowdfunding website states a result of 377.000 dollar and the campaign is still running. Bluerise started the successful crowdfunding campaign on 7 September (on top photo). 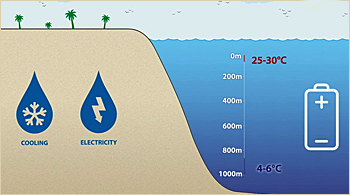 New OTEC-technology
Bluerise has developed a new Ocean Thermal Energy Conversion (OTEC) technology to generate energy from the ocean in the tropics.

This makes OTEC a very reliable source of energy that can be easily integrated into the electricity grid. 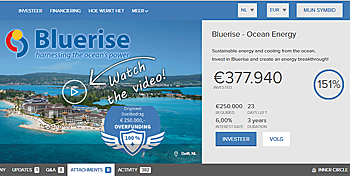 On 26 October the campaign website showed 377,940 dollar was raised.

Commercial roll out
The combination of a more efficient thermodynamic system with smart control systems form part of Bluerise’s B-TEC technology which can provide savings of up to 20 percent in costs per kwh.

In the tropics the surface water is 25 to 30 degrees, while the temperature is at 1,000 meters depth between 4 and 6 degrees. Bluerise uses this energy to produce sustainable cooling and electricity.

The company tested a demonstration size advanced OTEC power plant in which mixed working fluids are used and B-TEC is ready for commercial rollout.

In Curacao, Bluerise is working on a B-TEC project at the airport and in Jamaica it is intended to build a cooling plant for the local energy supply company New Leaf Power at the Montego Bay.

Cheaper cooling
Robert Wright, CEO of New Leaf Power, partner Bluerise in Jamaica: ‘Bluerise offers a clean and cheaper alternative by cold sea water 1,000 meters deep to pump up to cool our hotels. This cooling mode is 10 times more efficient, saving up to 90 percent of the energy.’ 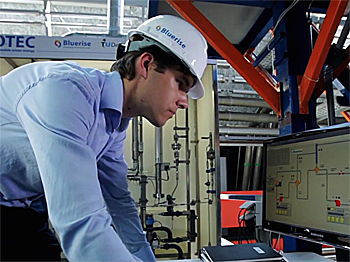 Development of B-TEC at Delft University of Technology.

Energy saving on air conditioning
In the tropics, more than a billion people live near the coast. More than half of the energy goes to air conditioning. These air conditioners use a lot of expensive, non-sustainable electricity and provide a lot of CO2 emissions.

Cold water from the deep ocean is able to cool buildings at a much lower cost in a sustainable way. With the temperature difference between hot water on the surface and the cold deep water, electricity can also be generated day and night.

Because unlike solar and wind energy, ocean energy is always available and does not need to be supplemented by polluting energy at times when the sun is not shining or the wind is not blowing.