The first BlueTec tidal energy platform was formally named the 'BlueTec Texel' by the Mayor of Texel, the Netherlands on 9 April. The floating platform, which holds tidal turbines below the sea surface, will soon be positioned near the island of Texel supplying clean electricity to the Dutch grid.

The platform is the first of its kind to enter the market as a complete, integrated tidal system that can immediately start producing electricity. 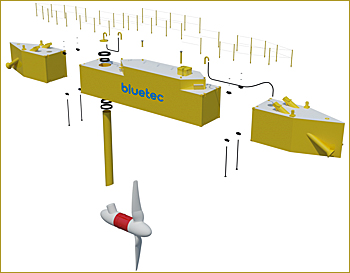 The 24m long BlueTec platform is easy to assemble and can hold multiple turbines underneath. All vulnerable electronics equipment is inside the platform.

All-in-one platform
"We are very pleased that we have reached this exciting milestone for our first floating tidal demonstration platform", Bluewater’s head of new energy Allard van Hoeken said at the naming ceremony.

Mr. Van Hoeken added: "It is wonderful to see the Texel tidal energy project come to reality. Today’s ceremony puts us a step closer to our goal of putting an all-in-one tidal energy platform on the market and delivering clean, local and endless energy to the world."

Try out of turbines
The coming weeks, the platform will be installed offshore the island of Texel and connected to the Dutch electricity grid – starting its electricity production before summer. It is meant to stay there producing electricity for several years, allowing multiple turbines to be tried out.

This first BlueTec will serve as a demonstration platform targeted at remote locations worldwide, such as islands in Indonesia, Philippines and the Pacific. It is also the start of further development of higher capacity tidal energy platforms, to be deployed in large farms. 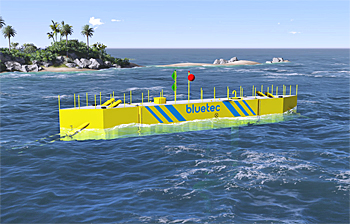 Artist impression of a BlueTec platform off the coast of a tropical island.

Collaborative efforts
The project draws on the specialist skills and experience of an impressive list of partners, many of them having their core business in the offshore oil&gas industry. "This project is realized thanks to the close cooperation between all involved. Everyone has demonstrated huge enthusiasm – it is fantastic to be a part of that", concluded Mr. Van Hoeken.

This platform is targeted at a worldwide market, it can be shipped as containers and installed anywhere in the world, to provide clean electricity in remote areas and small islands, replacing expensive and polluting diesel generators.

An important advantage of tidal energy is its predictability and consistency, bringing stability to local electricity grids.

Modular benefits
The platform is a development of Damen’s modular barge system – a flexible product that can be put into effect in the construction of a wide range of vessels from dredgers and jetties to ferries and pontoons.

Damen used three standard container-sized modules to construct the Texel platform. The efficiency of containerized transportation combined with uncomplicated assembly means that the platform can be transported and installed anywhere in the world.

The BlueTec platform is developed for cost effective installation, operations & maintenance of tidal turbines. BlueTec floats and can be towed to location without heavy lifting at sea.

This news item was originally published on the website of Damen.