BMM, a joint venture of BAM Nuttall and Mott Macdonald, has been awarded a contract valued at 23 million British pound by Leeds City Council for a flood protection scheme, including the installation of movable weirs in the river Aire.

The scheme is to provide 1 in 75 year flood protection for the city of Leeds with works extending for 4.3 km from the city mainline railway station to just below Knostrop weir.

Reducing river levels
This scheme will see the replacement of the existing fixed weirs at Crown Point and Knostrop with moveable weirs that can be lowered in flood conditions to reduce river levels and the threat of river flooding. This is the first time that these moveable weirs will have been installed in the UK. 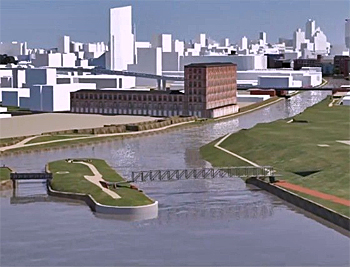 Merging canal and river
An island at Knostrop Cut which separates the river from the canal will also be removed to allow the river and canal to merge. This will assist the flow of water in flood conditions.

Linear flood defences in the form of walls and hard landscaping in the city centre will also be constructed.

On completion this scheme will provide the city centre, over 3,000 homes and 500 businesses with protection against a one in 75 year flood event from the River Aire and Hol Beck.

The project will take 125 weeks with a completion date of March 2017.

This news item was originally published on the website of Royal BAM Group.

Simulation of proposed moveable weir at Crown Point Weir to lower the River Aire water levels throughout the city centre, during a flood event.