Boskalis and Van Oord to reinforce coastline by creating beach in front of sea dike, the Netherlands

Regional water board Hollands Noorderkwartier and the national Department of Public Works and Water Management intend to contract a joint venture of dredging companies Van Oord (50%)  and Boskalis (50%) to reinforce and maintain the Hondsbossche and Pettemer sea dike, the northern stretch of the Dutch coastline.

The contract with a value of approximately 140 million euro comprises the construction and maintenance of the new sandy coastline for 20 years.

The project is part of the second national High Water Protection Program. The contract will be signed on 11 December 2013.

Twenty years maintenance
The project will commence early 2014 and will encompass sand replenishment for the construction of a beach and dunes. After completing the project on 31 December 2015, the Van Oord – Boskalis joint venture will be responsible for maintaining the coastline for another 20 years.

The replenishment activities will be carried out with four trailing suction hopper dredgers depositing 40 million cubic meters of sand sourced from sea. 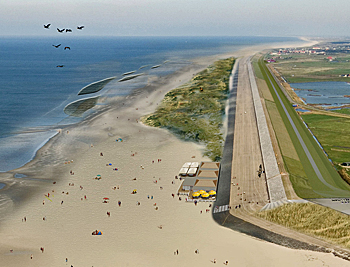 Impression of the beach to arise in front of the current sea dike.

Seaside enforcement
In 2006  new scientific data revealed that waves along the Dutch coast possessed more energy and - in cases of a super storm - could run up higher on the Hondsbossche and Pettemer sea dike then always had been assumed. As a result the possible occurences of up rolling waves overtopping the sea dike doubled.

The sea dike no longer met the safety criteria to withstand a possible super storm on the North Sea to occur once in 10.000 years.

Following five years of studies and consultations with the local community, it was decided to reduce the overtopping by creating a beach in front of the sea dike.

The main advantage of a beach is an optional extra reinforced - by sand suppletion - in case of further sea level rise. Additionally the new beach is expected to generate more tourism, stimulating the local economy.

This news item was originally published on the website of Van Oord and Boskalis.