Dredging company Boskalis has been awarded the first phase of the Marker Wadden project, by national public works department Rijkswaterstaat. The project includes the construction of a nature island in lake Markermeer, the Netherlands.

This first island will serve as a test case for the development of the other islands in a later phase of the project. Ultimately, the Marker Wadden should cover an area of 100 km2 with reed marshes, mud flats and shallow littoral zones.

The contract for Boskalis has a value of 33 million euro and work will commence early 2016.

The design of the Marker Wadden islands (see a first impression above) is conducted by Vista landscape in collaboration with Svasek Hydraulics. The final design is expected to be released shortly. 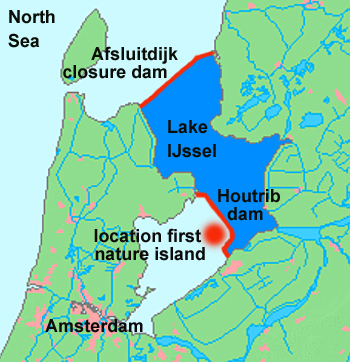 Lake IJsselmeer is separated from the North Sea by the closure dam Afsluitdijk. Four large polders were reclaimed from the lake between 1927 and 1967. The plan for a fifth polder lead to the construction of the Houtrib dam that split lake IJsselmeer in half. However, the plan for the fifth polder was abandoned, leaving lake Markermeer as a large stagnant shallow water.

Stagnant water
The Marker Wadden project has been initiated by the Dutch national conservation trust Natuurmonumenten, in cooperation with Rijkswaterstaat. The development of nature islands is to boost the biodiversity in lake Markermeer, with 700 km2 one of the largest freshwater lakes in Western Europe.

Lake Markermeer is part of the lake IJssel and has been cut off from the North Sea by the closure dam Afsluitdijk (1932) and later split off by the Houtrib dam (1976).

The separation of the two lakes had a major impact on the water quality and ecology of lake Markermeer.

Before the Houtrib dam was built, fine sediments flushed - by currents transporting the silt - to deeper parts of the lake. This no longer being the case, a suffocating blanket of silt has now accumulated on the bottom of the lake Markermeer.

Moreover, as the lake is relatively shallow - only 2-4 m deep -, waves keep churning up the sediments, leading to high turbidity even at moderate wind speeds.

As a result of the stagnant water, fish and bird populations have declined dramatically. 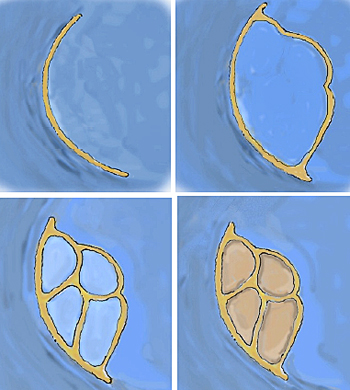 Natural sedimentation processes and flow pattern will be followed to 'construct' the islands.

Trap the silt
Conservation organisation Natuurmonumenten has initiated the Marker Wadden project to address these problems. It developed a plan for the creation of islands with natural shores that can trap the silt and decrease the water turbidity.

Suspended sediments will settle on the lee side of the islands. This will greatly improve habitat quality for endangered plants and animals.

Restoring the water quality of lake Markermeer will boost productivity of the aquatic food chain from the bottom up, and will likely result in a recovery of fish populations.

If there are sufficient land-water environments, natural processes will start to play a role in shaping marshes and wetlands.

Showcase of modern water engineering
The restoration of lake Markermeer with the new nature islands is a technical challenge. The project will be based on the concept of 'Building with nature', maximizing the use ​​of natural processes.

The engineering is not restricted to the construction of the islands itself, but also to the creation of these processes.

In the case of the Marker Wadden project, the 'building with nature' involves the dredging of a deep channel in which large amounts of sediment will accumulate due to natural flow patterns and gravity. The trapped sediment will be used to build the islands.

This news item is based on original press release by Boskalis.

Impression of what the Marker Wadden will look like after 2020.