Dredging company Royal Boskalis Westminster has been awarded three dredging-related contracts on the African subcontinent with a combined value of approximately 75 million euro.

It concerns projects in Angola, Gabon and Senegal. 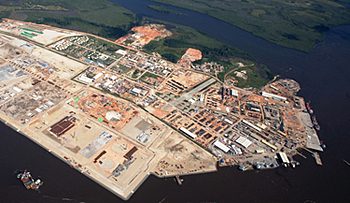 Boskalis was also involved in the construction of the LNG port Soyo in Angola from 2007-2009.

Angola: dredging LNG port
In Angola, Boskalis has been awarded a contract by Angola LNG for dredging activities related to maintaining the access channel and turning basins of the Soyo LNG port.

The project will be executed in joint venture and involves the removal of approximately 11 million cubic meters of sand and silt by medium-sized trailing suction hopper dredgers. Work is set to commence in the third quarter of 2015 and will be completed by the end of 2017.

Boskalis also executed the initial capital dredging and reclamation works for this LNG port on behalf of Angola LNG Ltd. from early 2007 until mid-2009.

Gabon: reclamation and dredging port
For the construction of an iron ore terminal in the Gabonese port of Libreville, Boskalis has been awarded a contract by Gabon Special Economic Zone Mineral Port for reclamation works and capital dredging.

Boskalis will reclaim 45 hectares of land for the terminal and dredge a berthing area for bulk carriers. For this project a total volume of 3,2 million cubic meters of sand and silt will be dredged using medium-sized trailing suction hopper dredgers.

Senegal: river dredging
Furthermore, Boskalis signed a contract with Agence Nationale des Affaires Maritimes in Senegal for maintenance dredging in the Casamance river. This river serves as a fairway for vessels destined for the city of Zinguichor. Over a length of 65 kilometers a medium-sized trailing suction hopper dredger will remove a total of 1,5 million cubic meters of sand.

This project will commence in July 2015 and is expected to be completed by the end of 2015.