Boskalis' dredger Cyrus in a race against the clock to complete new section Suez Canal, Egypt 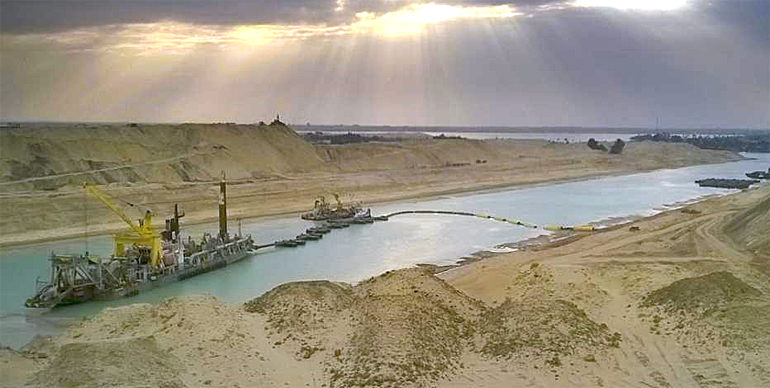 "Our consortium will be dredging 180 million cubic meters in less than one year", area director Bas van Bemmelen of Boskalis says. A consortium by Dutch dredging companies Boskalis and Van Oord, together with Jan de Nul (Belgium) and NMC (Abu Dhabi), is in a race against the clock to have a 35 km long parallel section of the New Suez canal ready by August of this year.

A fleet of 20 cutter suction dredgers of different sizes and with different capacities, and a number of trailing suction hopper dredgers removes 1 million m3 of material every day.

Boskalis is present with four cutters and two hoppers, including the cutter suction dredger Cyrus 2 (on top photo). 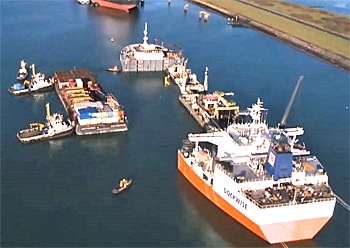 Another cutter dredger of Boskalis present in Egypt is the Edax, here seen being loaded aboard of semi-submersible heavy lift vessel Trustee in Rotterdam.

Work on several fronts
"Our section of the canal will only be opened for operations when it has been completely finished. In view of the layout of that section, we could work on six fronts at the same time, in part depending on when the various vessels arrive. However, given the logistics and the location of the accommodation, we are trying to concentrate the work as much as possible on a limited number of fronts", explains Van Bemmelen in an interview in the March edition of the e-magazine of Boskalis.

According to Boskalis the time pressures on a project have never been so enormous, and never has there been a project with such high production volumes.

The consortium will be dredging 180 million cubic meters in less than one year. 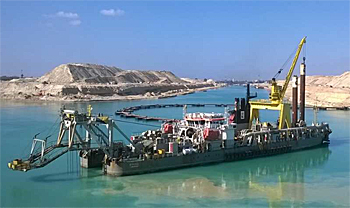 Three dredgers on a single location
The material to be dredged consists largely of not too hard cemented sand and gravel, allowing the consortium to use cutter suction dredgers to cut up the bottom layers and then send in the hoppers to dredge the material.

Van Bemmelen: "Our job is to build a canal that will be 24 meters deep and 400 meters wide. Depending on the type, a cutter suction dredger can cover a width of 100 to 140 meters. By deploying the cutter suction dredgers a number of days after one another and getting them to work diagonally behind one another, we can work with three cutter suction dredgers at the same time in a single location. That means we can remove layers of four to six meters at a time. The bottom layer can, in principle, be managed using the hoppers. In that way, we hope to make our logistics as efficient as humanly possible."

It's a gigantic logistical operation, assures Van Bemmelen. In full swing the project will have approximately 1,800 people at work.

This news item is based on an article published in Boskalis' e-magazine of March 2015.