Royal Boskalis announces that it will be executing the dredging scope for the development of the first large-scale LNG export facility in Kitimat, Canada.

The announcement followed the final investment decision by the shareholders earlier today. The dredging contract value is approximately 100 million euro. The LNG export facility near Kitimat will be Canada’s first. 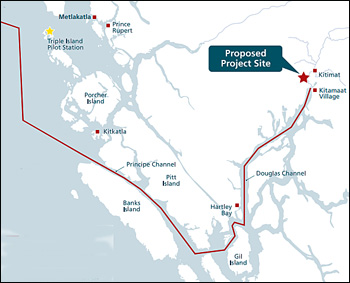 The large LNG carriers will navigate a 294 km long route from the Pacific coast (left) to the new to be constructed LNG terminal near Kitimat (top right).

The dredging activities are expected to continue into 2020.

This news item was originally published on the website of Boskalis.
(top photo: arrival of first equipment near Kirimati - photo and chart: LNG Canada)

Video presentation released by LNG Canada on the shipping routes
.

Video presentation released by LNG Canada (in 2015) while selecting the best location for the new LNG harbour.