The contract is worth 35 million euro. The dredging work is due to be complete by summer 2016. 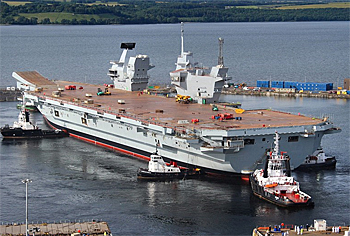 The Defence Infrastructure Organisation, which manages land and properties of the Ministry of Defence, is in charge of the project.

Project manager Paul Simmonds of Defence Infrastructure Organisation (DIO) said: "DIO has worked closely with our Royal Navy customers to ensure this work will be carried out in the most cost-effective way, taking into account the local marine environment, without impacting on the existing operations at HMNB Portsmouth."

Transformation of Portsmouth harbour
Simmonds: "Along with the 51 million pound jetty upgrade works we announced earlier this year, provision of high-voltage power for the ships when berthed, installation of navigational aids within the channel and the design and production of QEC-specific gangways, this contract forms part of a 100 million pound investment to transform Portsmouth Harbour into a state-of-the-art home for HMS Queen Elizabeth and HMS Prince of Wales."

This news item was originally published on the website of Defence Infrastructure Organisation and Boskalis.