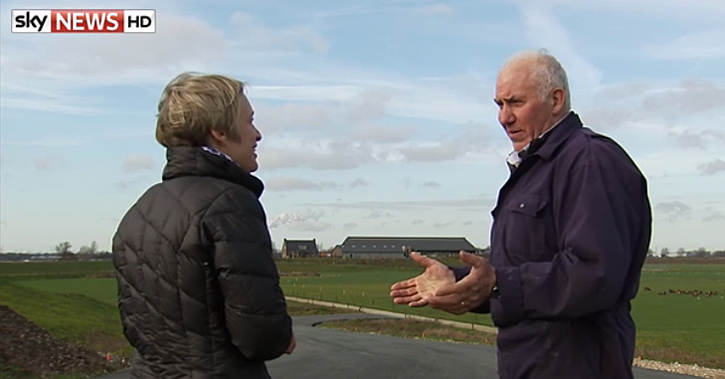 The media coverage is a result of recent flooding of the Somerset Levels in South West England.

Large parts of this low level coastal plain flooded early January because of excessive rain fall and several extreme high tides at sea. Some 65 square kilometres of land are under water for over a month now.

Rachel Younger (left) of Sky News went to The Netherlands and interviewed Dutch dairy farmer Nol Hooijmaijers (right) who lives close to the Meuse river. On his own suggestion, his farm was knocked down to be rebuilt on a man-made mound.

The construction of mounds with rebuild dairy farms is one of the icons of the national Room for the River programme.

Appeal for Dutch engineers
The Dutch way of flood protection caught the attention of the British media when Ian Liddell-Grainger, member of parliament for the Conservative Party, called upon Dutch engineers to sort out Somerset Levels flooding, and start dredging the rivers.

MP Liddell-Grainger gave a voice to the local farmers in Somerset Levels who blamed the Environmental Agency for stopping the dredging, causing the rivers Parrett and Tone to silt up.

In responce the Environmental Agency claims that the situation is complex and that dredging is not the only solution. In fact - without additional measures - dredging would only relocate the flood problems to places elsewhere along the rivers.
Read The Telegraph, 31 January 2014: Dutch engineers could be called in to sort out Somerset Levels flooding

Dutch polder systems
The Somerset Levels have been embanked and drained for many centuries. In the 17th century Dutch drainage engineer Sir Cornelius Vermuyden contributed to the expansion of the drainage system, creating new polders that - like in The Netherlands at that time - were kept dry with windpumps. 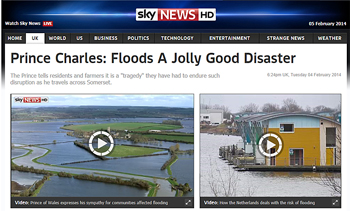 Searching for new Dutch measures
Rachel Younger's report on Dutch flood protection measures was broadcasted by Sky News on 4 February. In addition to her interview with farmer Hooijmaaijers, Younger also spoke several Dutch flood experts, including director Hans Brouwer of the national programme Room for the River, director Rutger de Graaf of Deltasync that builds floatable houses and Deltacommissioner Wim Kuijken who is working on a long term nationwide climate adaptation programme for flood resilience.
See Sky News, 4 February 2014: How the Netherlands deals with the risk of flooding

Art of climate proving
BBC-reporter Anna Holligan was in Rotterdam to report on the fine art of water control, and how the Netherlands are looking for new ways to make the country climate proof.

A BBC-crew also visited other locations in The Netherlands, including Flood Proof Holland, a facility to test temporary flood defence systems. Their report will be broadcasted next week.
See BBC News, 5 February 2014: Europe floods: What can we learn from the Dutch?