Water sets screw in motion
The turbines are made by the Dutch watertechnology company Landustrie. The LANDY hydro power screws are installed in a small overflow dam of the Thames where they will generate energy. The water that flows downstream sets the screw in motion and so generates 'green' electricity for local use. It is estimated the turbines will reduce carbon dioxide emissions by 790,000 kilos per year.

Leasing the dam
The Archimedes Screw turbines, supplied to the Windsor Castle by Southeast Power Engineering Ltd, will be ready to operate from November. The company is working in partnership with the Environment Agency, which is leasing the weir. 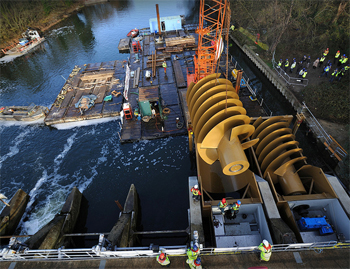 Large potential for green energy
The Environment Agency sees the many small dams in the UK as untapped source of energy and is keen to ensure hydropower fulfils its potential as a small but useful renewable energy source, whilst protecting the environment.

In Berkshire, the agency teamed up with Windsor and Maidenhead council to investigate schemes at Marlow, Boveney and Boulters weirs, while work is already under way to generate electricity at Osney and Goring weirs in Oxfordshire.

The small dams were originally built to control water levels for navigation and flood risk purposes.