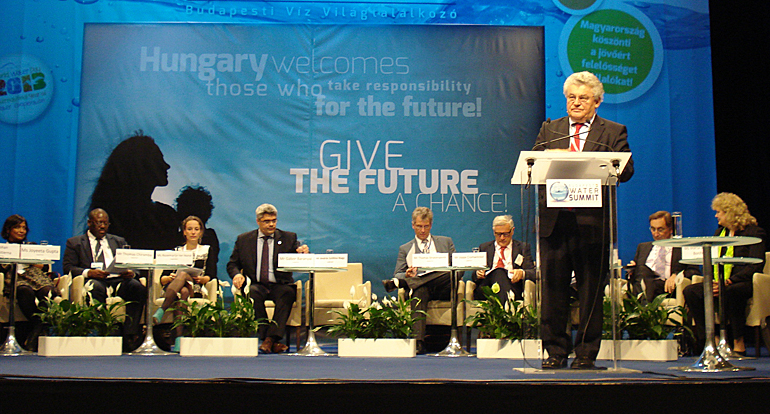 Hunger and poverty remain high on the agenda of the United Nations as new global post-2015 targets in succession of the current UN Millennium Goals. All other possible post-2015 goals are global debated, with the water community claiming a stand-alone goal on water.

Three times this year the global water community met and discussed their ambitions: in March in The Hague when celebratiing World Water Day, in September in Stockholm during the annual water conference and finally during the Budapest Water Week that took place from 8 - 11 October.

New elements: water resources and waste water
The Budapest Water Summit  was the last major meeting of water community to talk about the outlines of a potential sustainable development goal on water (SDG water).

Next to the current issues of access to drinking water and sanitation, the water community wants to add sustainable use of water resources and waste water treatment as new element to a global water goal.

Development of a water-secure world
By adopting the final statement on the last day of the Budapest Water Summit, the global water community, represented by scientists, civil society, business, philanthropy and youth, plead for a dedicated SDG-goal on water to develop a water-secure world with clear inter-linkages to cross cutting issues as climate change, training of many new water professionals and increase of resilience to water-related disasters, as well as to the other SDG goals.

Final adoption next year
Later this year the United Nations will start a period negotiations on the new post-2015 goals. The aim is to have a draft version of the goals ready by summer next year, so all the detailing can be worked out on issues as monitoring and institutional settings.

At the UN's General Assembly in 2015 the complete set of SDGs is supposed to be adopted.

Smarter goals
As one of the major driving forces behind the Budapest Water Summit, rector András Szöllösi-Nagy of the Unesco-IHE (top photo) called for the development of smart goals that go beyond access to taps and toilets. At the summit was said many times: (1) no drop comes from the tap if no water is available, (2) without water treatment sanitation leads to water pollution.

During the closing ceremony Szöllösy-Nagy reminded that the summit was the last opportunity for the global water community to make a stand for  a dedicated goal. "This is not obvious there will be such dedicated goal. It is now subject to diplomatic negotiations and global geopolitics", and he urged the water community not to sit back, but further explore interdisciplinary science and building networks with other sectors such as agriculture, energy and health.

Joppe Cramwinckel (WBCSD) reported on behalf of the Business Forum at the closing ceremony.

"The last five years the issue of water made its way into the board rooms. Business is now realizing it is not on their own combating the pollution of securing its water supply. At this summit we discussed the very difficult issue of sharing water recourses in a river basin. About local cooperation and being part of local solutions",  said Cramwinckel.

According to Cramwinckel the most challeging water issue for the business community is to engage with the issue of WASH-facilities for poor and marginalized people. 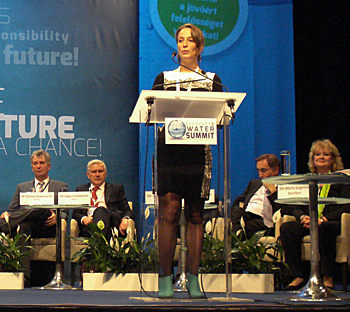 Rozemarijn ter Horst reported on behalf of the Youth Forum at the closing ceremony.

Daily shower, own toilet, swim in rivers
On behalf of the Youth Forum, Rozemarijn ter Horst, reported that young water professionals present at the summit, underlined the importance of a dedicated water goal.

In a very enthusiastic speech she took her audience to the year 2025 with a new generation of young water professionals with many new tools and water knowledge. She envisioned that people all over the world have the ability to take a daily shower, to pee on their own toilet and to swim in every river.

"It is the year that UN Secretary-General Ban Ki-moon has a big hangover from a party, celebrating the achievement of the sustainable development goals," she humoristic added to the serious debate.

The final statement of the Budapest Water Summit: download here (as pdf-file).