Buwatec announced the launch of a new assortment WSW water storage tanks in three qualities pre-fabricated, easy-to-handle versions. The new versions include the use of stronger steel quality and a special double sided thermoplast coating. The new versions will become available in April.

Specific task
The new product differentiation allows Buwatec to consider the specific use of a tank and offer an economy, standard or industrial tank version. This can result in the use of less steel.

All new versions of the modular steel water tanks will be supplied with a new standard patron for bolt sets. This requires less bolts in high tank sizes. 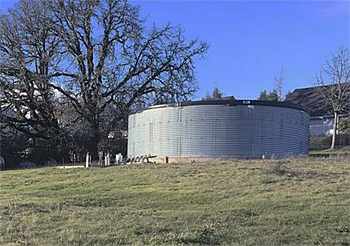 Pre-fabricated Buwatec water storage tank as part of the irrigation system of US farmer Bodgan Caceu.

Coverage to keep water cool
One of the users of a Buwatec water stoage tank is US farmer Bogdan Caceu. He searched the world to solve an irrigation problem on his farm. In the end he build his own water storage system with a pre-fabricated Buwatec tank.

As cover he used BUHexa-covers to keep the water cool, algae-free and reduces evaporation to a minimum.

This way he put together a simple, inexpensive water storage system that holds 35,000 gallons.

“It doesn’t get us through the entire season, but I wanted to see how inexpensive and easy to build it could be,” Caceu said.

Caceu estimated that the entire system cost less than 16,000 US dollar.