That 2.6 billion people live each day without a proper toilet is shocking. Despite impressive development gains since 2000, we are simply not making much progress expanding proper toilet coverage. According to current trends, by 2015 - the year when global leaders will assess if we have reached the United Nations Millennium Development Goal target to halve the number of people lacking basic sanitation - more people, not fewer, will lack safe sanitation facilities.""
The Prince of Orange wrote this in a recently published opinion article.

Launch of new campaign
The prince wrote his opinion article as chairman of United Nations Secretary General's Advisory Board on Water and Sanitation (UNSGAB), on the occasion of the start of the initiative ‘Sustainable sanitation five year drive to 2015’ when the prince spoke at the 16th UNSGAB-meeting in New York on June 21.

In December 2010 the UN has adopted a resolution that urges all Member States to increase investments in sanitation and hygiene education. The resolution was the basis for UNSGAB to take the initiative for a new campaign.

Relucantce to speak publicly about sanitation
In his opinion article the prince of Orange discusses the reasons why this particular UN-goal is lagging behind. “Why it is, in the year 2011, that 2.6 billion people don't have a proper toilet. Many capable people have tried to answer this question, and clearly there is not one single answer. Certainly, it is difficult to expand sanitation services in pace with rapid population growth. However, the experts all agree on a fundamental reason - decision makers are reluctant to speak publicly about sanitation and, as long as sanitation is stigmatized, the crisis will continue. We urgently need public education, targeted policy and, above all, the political will to tackle this challenge”, appealed the Dutch prince. 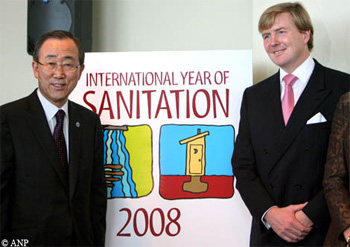 The prince of Orange and UN secretary general Ban Ki-Moon in 2008 with the launch of the International Year of Sanitation.

Read the full opinion article on the website of UNSGAB.

Read the opening speech of the prince of Orange at the 26h UNSGAB-meeting on the website of the Dutch Royal House.