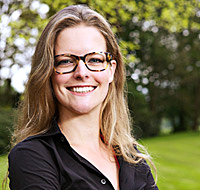 Charlotte Spliethoff (29, Netherlands) is the winner of the 2012 EFCA competition for engineering excellence among young professionals. This was announced by European Federation of Engineering Consultancy Associations (EFCA). Spliethoff will receive the award at the EFCA congress in Lisabon on May 25. During the congress she will present her winning project: the International Levee Handbook.

This year’s contest, in EFCA’s 20th anniversary year, attracted more contestants than ever. A total of 31 Young Professionals from 11 countries entered the event. Female participation is also noticeably on the rise, with 11 ladies from 7 countries submitting entries for the 2012 event.

Technical elements in a wider perspectiveCharlotte Spliethoff, project manager and geotechnical consultant at Grontmij in the Netherlands, is experienced in the design, inspection and testing of dykes. Combined with her background in geology, geo-ecosystems and climate research, she has the necessary skills to analyze technical elements within the wider perspective of sustainability, flood protection and climate change.

Compendium of good practise for flood protection
In recent years, coastal flooding caused by storms and failure of flood defences, such as Hurricane Katrina in New Orleans and Tempête Xynthia on the Atlantic coast of France, have caused loss of life and destruction of property on a devastating scale. In 2008, an international project was set up to produce a compendium of good practice in the design, construction, maintenance and improvement of artificial levees, written by experts and practitioners, with the aim of sharing knowledge, experience and innovation in the area.

The International Levee Handbook will be published in 2013. Charlotte Spliethoff was selected to lead one of the teams, with responsibility for the final section of the handbook.

Fine example for next generation of engineers
EFCA President Jan Bosschem, Chairman of the competition jury, commented: “Charlotte’s entry impressed the jury because of her achievements to date relative to her age, and through the levels of innovation and sustainability in her project, which were essential criteria in our evaluation. She is a fine example of the talent that is required in the next generation of leaders in our sector.”

The two runners-up are Mette Ryom Nielsen, 35 (Denmark) for her innovations in the method for groundwater mapping, and Miquel Peiro Sendra, 32 (France) for his role as team manager in the technical calculations and site control for the construction of the Fondation Louis Vuitton building, which subsequently inspired him to set up his own company.

This press release was originally published on the website of EFCA.