In the presence of Dutch king Willem-Alexander, the Chinese government signed an agreement with the World Wildlife Fund (WWF) on better coastal protection.

The signing was part of a visit by the Dutch king to Chongming Dongtan national nature reserve, near Shanghai on 28 October.

The coming years these areas, vital for migratory birds, will be well protected and managed. There will also be awareness campaigns on the importance of wetlands and knowledge will be actively exchanged other delta countries like the Netherlands.

"The arrival of King Willem-Alexander has given an extra push and now we can get started," Esther Blom, head of freshwater programs at WWF said. 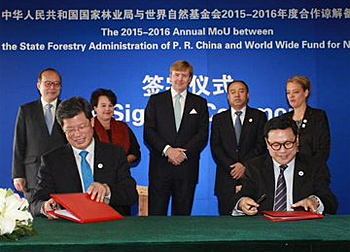 Fast disappearing wetlands
According to WWF better protection of wetlands along China's east coast is of great importance.

The coastal area is a buffer against flooding, filters polluted water and offers food and resting areas for large numbers of migratory birds and marine life. In addition, the coastal region employs millions of fishermen and farmers.

Since 2002, WWF supports a successful conservation project on Chongming island near Shanghai at the mouth of the Yangtze River, which now serves as an example for other regions.

It is also an important recreational area for people from the metropolis of Shanghai. 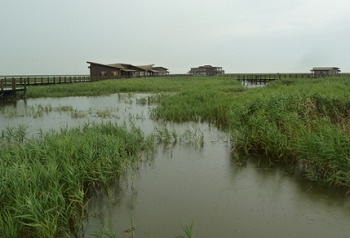 Dongtan national nature reserve on the isle of Chongming, near Shanghai.

The Chongming Dongtan Nature Reserve is subject of international research into habitats of migratory birds and biodiversity.

In the autumn Chongming is an important resting and feeding place for migratory birds on their way from Siberia to the south.

In this famous bird watching area are more than 250 species, ranging from cranes, small spoonbills to geese and duck species.

This news item was originqally published on the website of World Wildlife Fund (in Dutch only).