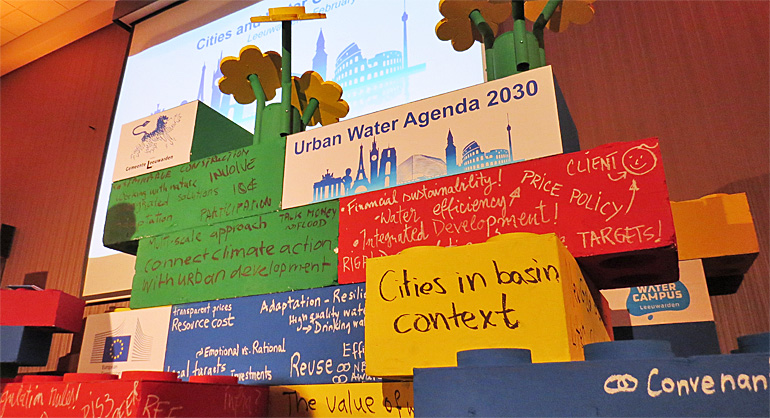 Visibly proud the mayor of Leeuwarden, Fred Crone, gave the Leeuwarden declaration a formal kick off at the end of the Cities & water conference in Leeuwarden, the Netherlands on 11 February.

Some 150 attendees from all over Europe, discussed the draft text that calls up on cities to improve their water efficiency, energy efficiency related to urban water systems, water quality, long term planning on water infrastructure, flood prevention and natural water retention. 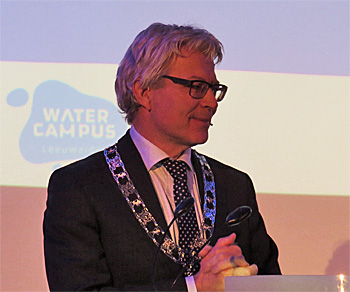 Proud mayor Fred Crone of Leeuwarden announcing the launch of the agenda.

Ambitious agenda
The Leeuwarden Declaration sets a very ambitious urban water agenda for 2030:
● maximum of xx% of water losses due to leakage in the distribution system
● reduction of xx% of the water consumption
● up to xx% of urban water to be re-used for non-drinking water
● reduction by xx% of energy consumption related to water supply and treatment
● recovery of xx% of nutrients and xx% of organic matter
● reduction of storm water overflows to xx%
The percentages will be published in the finale version of the declaration.

The conference in Leeuwarden was the formal kick off as part of the current Dutch presidency of the European Union. During the conference this agenda has been discussed by the attendees (see their input on top photo)

The agenda will be rolled out further in the coming months.

Raising awareness
The discussions during the day concentrated on the low awareness amongst citizens on the importance to address the future water challenges when it comes down to too much, too little and too polluted.

"European cities can learn from each other. That is why we initiated this declaration", said mayor Ferd Crone of Leeuwarden. "Dutch cities know much about flood protection, and Spanish cities known much about drought. This declaration intents to raise the awareness for a wide urban water agenda and hopefully local politicians will help us to implement this agenda. People want to see solutions", the mayor said. 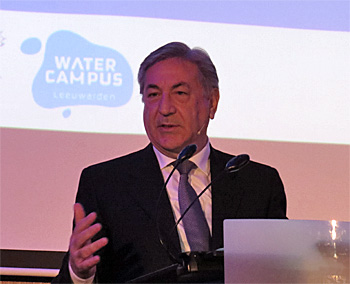 EU commissioner Karmenu Vella mentioned the opportunities of the agenda for cities.

Grasping opportunities
European commissioner Karmenu Vella for environment and marine, attended the conference and he emphasised the opportunities.

Water pollution and flood protection measures are often seen as costs, but according to Vella the urban water agenda offers new opportunities such as recovery of nutrients and energy.

"Cities want prosperity. Therefore it is important to have a good urban water system. This agenda can help them setting targets, take actions and grasp opportunities. For instance by regarding their waste water treatment plant as a source for raw materials and energy", the commissioner said.

Vella clearly favoured nature-based solutions that can be part of an overall green urban infrastructure, including natural retention of rain water, water parcs that are an integrated part of green infrastructures. 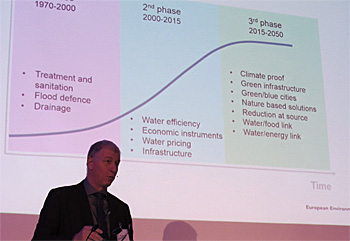 EEA director Hans Bruyninckx explained that it is not about adaptation of exsisting urban water systems, but about introduction of completely new systems.

Importance of water quality
Hans Bruyninckx, executive director of European Environmental Agency (EEA) explained that the urban water system is on the brink of a new phase.

The first phase started in the seventies with the building of treatment plants, flood defences and drainage systems. The second phase was from 2000 to 2015 when issues as efficient water use, tariffs dominated.

In recent years the focus has moved to climate resiliency, linking water to green infrastructure, energy supply and food production. "We are talking about a fundamental reorganisation of the urban water system", he assured.

Bruyninckx noticed that cities are re-discovering the importance of a blue element. This makes the water quality more important. "The good status as prescribed by the Water Frame Work is only a starting point", the EAA director said. "Clean water is no longer about point discharges only, it is about the whole water system. Including upstream and downstream of the city."

As a good example he mentioned the city of Copenhagen that has a public outdoor swimming facility in its harbour.

The text of the Leeuwarden Declarartion with the the key findings of the conference has been published on the website EIP Water.