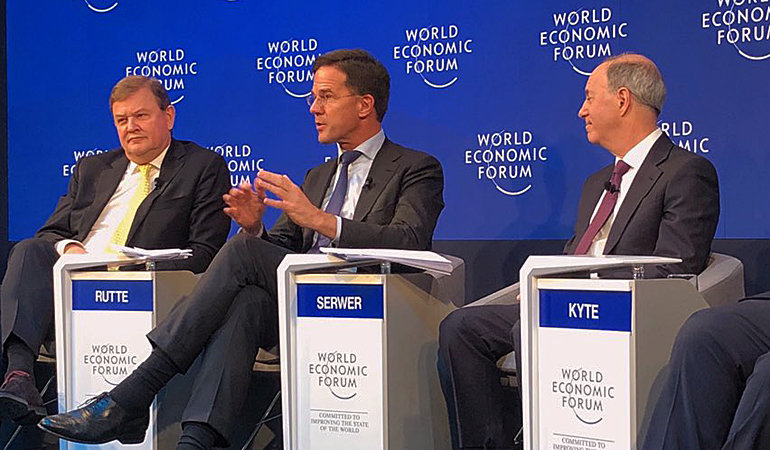 Two specific items on the agenda of the Dutch delegation were the roundtable meeting of the Valuing Water Coalition and the preparations by the Global Commission on Adaptation for a global action programme to be presented at the UN General assembly in New York in September. The World Economic Forum took place from 22 – 25 January. 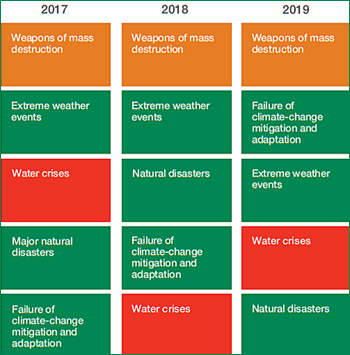 All three latest Global Risks Reports clearly indicate a big concern amongst business leaders about climate change. In the 2019-edition, water crises ranks at a fourth place in terms of potential impact.

Risk perception
The latest edition of the  Global Risks Report ─ that is always published just before the meeting in Davos ─ again reported that business leaders consider climate change a major risk to the global economy.

Extreme weather events and the potential failure to climate mitigation and adaptation, rank in the global risk top 3 both for likelihood and impact.

The risk perception of water crises has increased. In 2018 it took a fifth place in terms of impact, compared to a fourth place in this year’s report.

Speed up on adaptation
At the World Economic Forum Dutch Prime Minister Rutte (middle on top photo at the Climate Leadership Forum) urged all countries to speed up their actions to adapt to climate change.

Dutch Minister Van Nieuwenhuizen emphasised that climate adaptation is important for countries to remain viable and economically prosperous. "In the Netherlands, national and local authorities jointly allocated 600 million for measures to protect us from flooding, extreme rainfall and periods of drought. This type of agreement between governments, but also with companies ensures that smarter investments are made in climate solutions and countries become resilient", Van Nieuwenhuizen said. 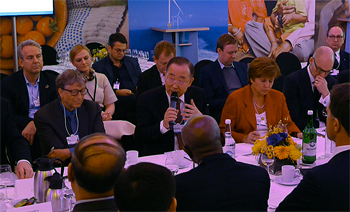 Meeting of the Global Commission on Adaptation, chaired by Ban Ki-Moon (middle).

Meeting of GCA commission
In Davos, the commission of the Dutch-based Global Centre on Adaptation (GCA) talked about their preparations for an action plan to be presented at the UN General Assembly in September in New York.

The GCA commission with Bill Gates (founder of Microsoft), Ban Ki-Moon (former Secretary General at the United Nations) and Kristalina Georgieva (CEO World Bank), is working on the worldwide acceleration of climate adaptation.

"Worldwide we already see light points in climate adaptation", 'said Ban Ki-Moon in Davos. "Infrastructure that is being prepared for extreme heat, agriculture that is set up for prolonged droughts and inhabitants of vulnerable coastal areas that are protected. But the fact remains that this must be deployed faster and on a larger scale than we see today." 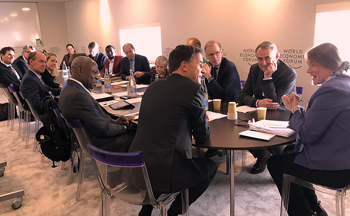 Meeting of the Valuing Water Coalition with CEO board members of private, public, civil society and international organisations.

Better valuing of water
On 24 January, Prime Minister Mark Rutte hosted a roundtable on the five principles of the Valuing Water Initiative, to incorporate the water values of all stakeholders.

CEO's and board members of private, public, civil society and international organisations discussed how to value water better and act accordingly.

ING Head of Wholesale Banking, Isabel Fernandez, announced that her bank will partner with the Dutch Government in the Valuing Water Initiative for the coming three years. ING will support the initiative with its public and private network and financial expertise in the transformation to a water secure world.

More information
Ministry of Infrastructure and Water Management
The Hague, the Netherlands
+31 77 465 67 67
www.government.nl/ministry-of-infrastructure-and-water-management