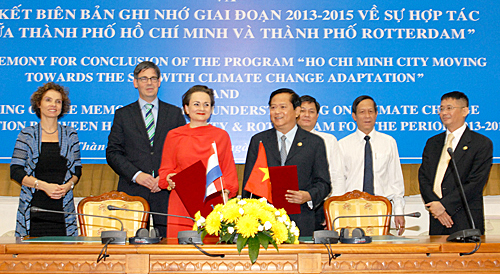 The strategy is a coproduction between various departments of the Ho Chi Minh city administration, Rotterdam City and the Dutch consortium Vietnam Climate Adaptation Partnership (VCAPS).

The ceremony ended a project that was initiated in 2011 by the knowledge network Connecting Delta Cities. The results of the project were well received and both cities want to continue their collaboration and signed a new memorandum of understanding.

Expansion towards flood prone coastal area
Over the last decade the built up area of HCMC has more than doubled in size and expanded toward the flood prone areas along the coast. A third of the city is already exposed to flooding at present. The urbanisation is expected to continue. The built surface will increase by fifty per cent and without appropriate measures two-thirds of the city will regularly flood. 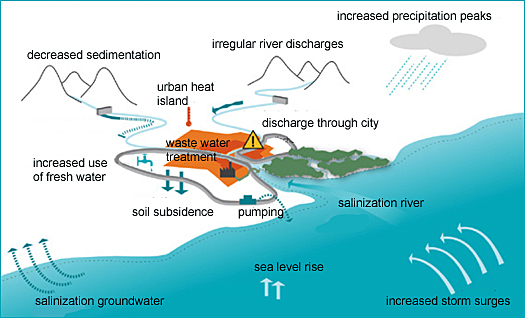 Bundled relevant data
The local government of Ho Chi Minh City, the Dutch consortium Vietnam Climate Adaptation PartnerShip (VCAPS) and the City of Rotterdam have been actively working together and first produced an atlas that bundles all available data in many maps on items such as urbanization, changing rain fall patterns, sea level rise, groundwater depletion, soil subsidence, strategically important objects such as power station.

Climate adaptation strategy
The next phase of the cooperation was the development of a long term climate adaptation strategy using an adaptive delta management approach and consists of six ‘strategic directions’ that together constitute a guide towards a climate proof future for HCMC:
- Base development direction on soil and water conditions
- Use a stepwise approach for flood protection
- Increase the water storage and drainage capacity
- Prevent salinization where possible, adapt where necessary
- Create alternatives for groundwater use
- Strengthen the blue-green network and ‘urban ventilation

Based on these six principles a draft Spatial master plan 2025 has been developed and two pilots have been conducted to translate the master plan into a new spatial design for two areas. The redesign had the objectives to relocate the harbor towards the sea and to improve the spatial quality. 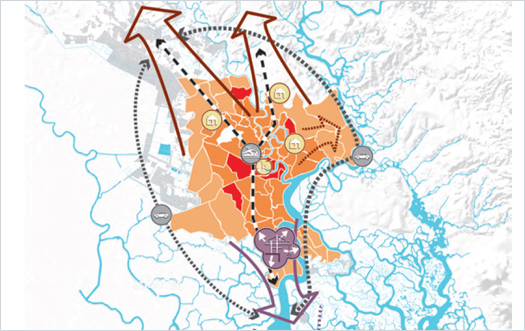 One the six principles for the long term development of HCMC is to move to higher grounds. 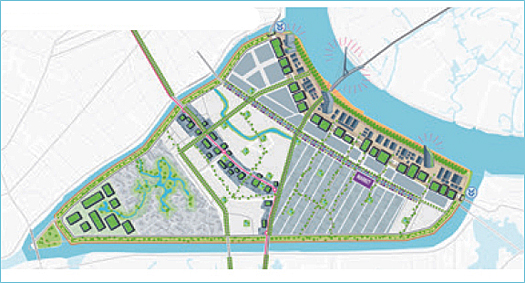 One of the two pilot was to resign HCMC’s District 4 and make it less vulnerable to flooding from the Saigon river.

Blue print for other delta cities
Alexandra van Huffelen of the City of Rotterdam: “The established climate adaptation strategy is the start of a new phase for which Rotterdam has been explicitly requested to continue to play a role, especially when it comes to securing responsibilities and increasing the knowledge of the various government agencies.”

The cooperation agreement will formalise the knowledge exchange within the network Connecting Delta Cities. Van Huffelen: “Delta cities are to some extent similar throughout the world. More and more people are living in these areas, there is a need for more space and the cities are prone to the sea level rise because of their location. The strategy for Ho Chi Minh City could, therefore, serve as a blueprint for an integrated approach to the climate issues in delta cities around the world”.

Adapted housing
Just like in Rotterdam, climate change is being seen as an opportunity for a more attractive and economically robust city. Project manager Mr Enrico Moens of Grontmij: “Based on six principles, we are proposing, for example, that construction no longer take place every where but only where the soil and water permit. Tidal locks are also installed to protect the city centre from flooding. Through design research with stakeholders, we determined where it is possible to adapt to the water and where flood protection is necessary. Adapted housing can be built at some locations of new urban areas.”