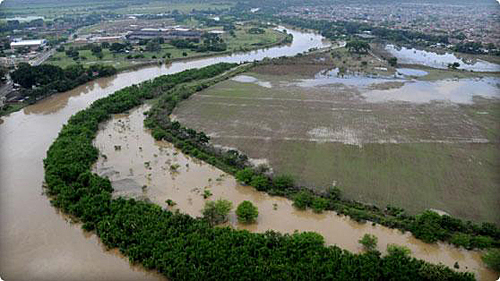 Director Hernando José Gómez Restrepo of the Colombian National Department of Planning and Dutch ambassador Marion Kappeyne van de Coppello signed in Bogota on December 19, 2011 a memorandum of understanding to intensify the cooperation between Colombia and the Netherlands on integrated water resource management (IWRM) and integrated river basin management (IRBM).

An important element of the MoU is the development of long term river basin plans for Colombia's biggest rivers, the Magdalena and Cauca.

The MoU was signed for a period of four years and is a first product of the in June 2011 established Colombian-Dutch Water Partnership.

Personal involvement president Santos
Following the heavy floods along the Magdalena river in December 2010, the Colombian president Juan Manuel Santos took immediate action and invited the Dutch embassy in Bogota to assist Colombia to prevent future flooding. Evaluating of the flood made clear that the water problems also required a profound analysis of the water management in Colombia and proposals for a more sustainable
and more integrated water management in the future. 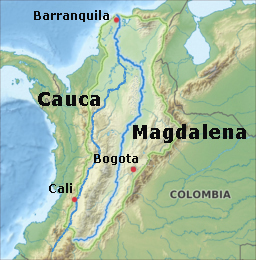 Both short and long-term planning
On of the main items of the MoU is the development of a long-term integrated plan for management of the Magdalena and Cauca river basins. For the short term the plan must respond to the consequences of climate variability, and for the long term to the climate change.

The plan is expected to include interaction with urban and rural planning, agriculture, fishing, bio-diversity, environmental aspects, infrastructure and energy matters.

Other in the MoU agreed actions include the assessment and assistance to improve the stability of the dams in both river basins and the implementation of an early warning system against flooding at national and regional levels.

Water governance: cooperation with different stakeholders
Under the supervision of the Colombian National Planning Department experts have already started a dialogue with their Dutch counterparts of the Water Governance Centre in The Hague. As part of the Misión Gobernanza del Agua (Water Governance Mission, MIGA) the main problems and possible solutions have been discussed and talks have been initiated for the creation a basis for cooperation between the different stakeholders. 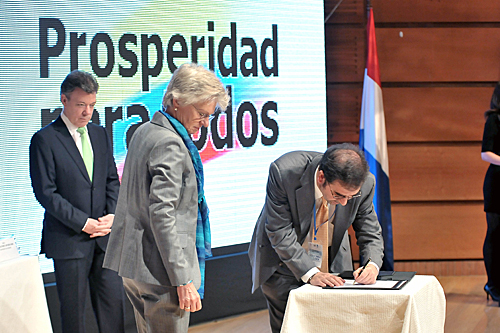 First joint study upstream Cauca
A few days following the signing of the MOU, president Santos announced the Colombian-Dutch agreement for a joint study on a specific part of the Cauca river. The agreement was signed by the Dutch embassy in Bogota, the town of Cali and the Corporacion Autonoma Regional Valle Cauca and concerned the upstream part from the dam near Salvajina, to the town of Santiago.

Santos pledged that the proposed study, "conducted by the Dutch, who are the most knowledgeable in the world on issues of water," will give a "final solution" to the issues of climate change and rising water levels in Colombia's rivers.

"This study will tell us, for example, which areas cannot be used for agriculture, which cannot be inhabited, which areas should be left for river overflow," according to Santos.