From from 1 to 4 December 2014, the Colombian-Dutch Dialogues will be held in the coastal city of Santa Marta, Colombia.

The event will be led by consultancy firm Witteveen+Bos.

Damage to motorway RN90
The motorway was constructed on a sand tongue between the sea and the old delta of the Magdalena River, and is a major transport artery. The construction of the RN90 has led to a deterioration of water quality in the area, and has caused swamp vegetation, mangrove forests and certain species of fish to disappear.

The motorway is affected by erosion due to local climate conditions and other factors, resulting in considerable economic damage. 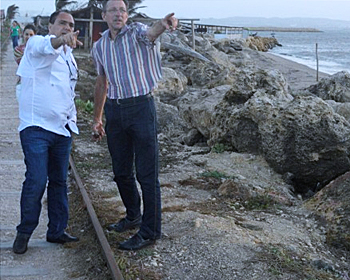 Temporary measures
The Colombian authorities have constructed stone cladding as a temporary measure, but this solution does not resolve the problem in the long run.

The coastal erosion at kilometre marker 19 is just one example of a wider problem that is affecting Colombia’s Caribbean and Pacific coasts.

The Colombian authorities decided to ask the Netherlands for assistance, as the two countries have a long history of collaboration in the field of water safety.

Four-day session
The Colombian-Dutch Dialogues will be held under the auspices of the ‘Partners for Water’ programme, and have been jointly organised by the Netherlands Enterprise Agency and the Colombian Ministry of Environment and Sustainable Development.

Once the four-day session has been concluded, the Dutch experts will prepare a problem analysis and propose a number of possible solutions. The recommendations will be presented to a number of Colombian government ministers on the last day of the dialogue session.