Comparative pilot effluent polishing with UV and ozone at wwtp Aarle-Rixtel, the Netherlands 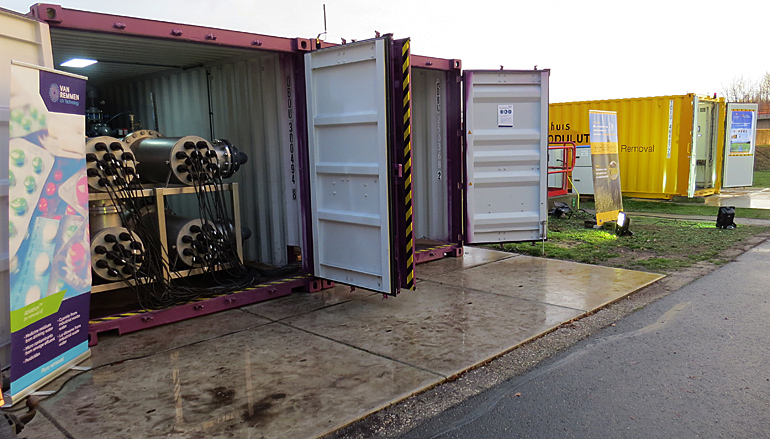 Dutch Minister Cora van Nieuwenhuizen kicked off a pilot at municipal waste water treatment plant (wwtp) Aarle-Rixtel, the Netherlands, on 17 December for the comparison of the additional effluent-treatment with ozone filtration and UV-filtration. The pilot is meant to get more insights in the performances of both water treatment technologies on the removal of medicine residues.

The pilot is part of an overall Dutch national programme to prevent medicine residues ending up in surface water. 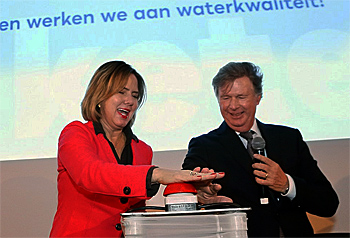 Without further intervention by its suppliers, the two containers will treat the effluent for four weeks.

The aim of this test is to provide regional water authority Aa en Maas a better insight in the removal of the individual substances of the medicine residue, the energy consumption, the formation of by-products and the costs. 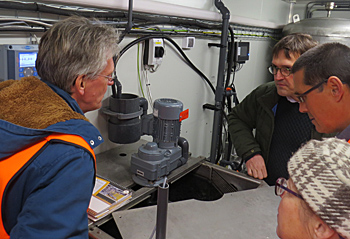 Nijhuis industries uses Bioctor-MBBR technology for the removal of the decomposed pharmaceutical residues.

Ozone versus UV
"Both treatment technologies have their disadvantages", commented Policy advisor Maarten Nederlof of Aa en Maas at the start of the pilot.

"It is possible to remove more medicine residue but that goes at the expense of an increased bromate concentration in case of ozone oxidation, and more energy consumption in case of UV-H2O2."

Nederlof hopes the pilot will reveal the optimum dosing of UV-light and ozone in relation to the removal of the remaining medicine residue in the wwtp-effluent.

Application of activated carbon
Last year, the activated-carbon technoogy, has already proven to be efficient at a pilot test at wwtp Papendrecht, the Netherlands. Here powered activated carbon was added to the sludge in the aeration tanks. This resulted in a good removal of the medicine residues, and a decreased toxicity of the effluent. However, the residues are not destroyed, only shifted from water to solid waste.

The dosing of powered activated-carbon in the aeration tanks may influence the removal of nutrients, so it may be necessary to adjust the wwtp first.