On 17 May professor Sieuwnath Naipal of Conservation International Suriname, kicked off a project to stop the coastal erosion and salinization of arable land at Weg naar Zee, near Paramaribo, Suriname.

The project is based on the concept of Building with nature, consisting of five permeable dams from walaba poles and bamboo fillings. The dams capture the sediment and help to establish a healthy sediment balance.

During the ceremony professor Naipal (second right on top photo) and donors, including the Dutch Embassy and Staatsolie Foundation, hammered the first six walaba poles in the ground. 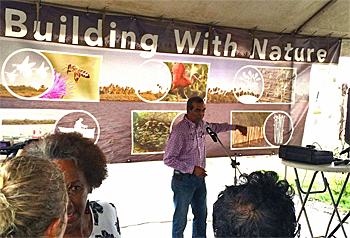 Professor Sieuwnath Naipal presents the concept of Building with nature.

Coastal sites under threat
The Weg naar Zee area in Paramaribo is the vegetable garden of Paramaribo, has numerous fisherman and harbors two religious sites, but these areas are under threat because of erosion and salinization.

Professor Naipal from the Anton de Kom University in Suriname foresaw the challenges and started to build a pilot wooden dam at the Weg naar Zee resort in 2015.

The dam captures sediment and helps to establish a healthy sediment balance. Once the near shore bed level has sufficiently risen, mangroves will regrow, developing a natural water defense protecting the hinterland against flooding and further erosion. 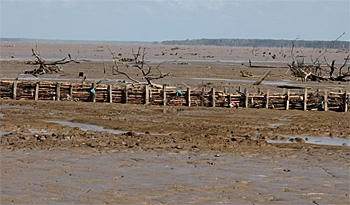 The success of the pilot attracted new, local donors to invest 200,000 US dollar for the construction of additional sediment trapping units in the coming months.

Building with nature
The approach is a replication from the Building with Nature programme along the coast of Central Java.

Here a similar technique has been used by Wetlands International, Ecoshape consortium and the Indonesian government in partnership with research institute Deltares, consultancy firm Witteveen + Bos, and other partners to stop coastal erosion in Central Java.

News video on the coastal erosion, the pilot initiated by professor Naipal and an explanation of the concept of Building with nature.