The construction of the 1.6 km Xinhua Waterfront Park at the east coast of Huangpu River, Shanghai, China, will start at the end of this month.

The waterfront has been designed by Rotterdam-based West 8 architects, in cooperation with Tongji University.

Given these objectives, West 8 designed a world-class waterfront park that harmonizes vegetation, atmosphere, culture and art against the metropolitan backdrop of Shanghai City. 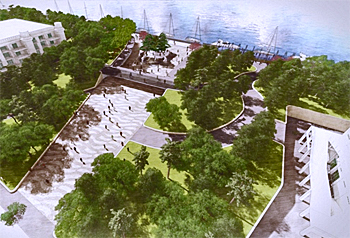 Impression of the new Xinhua Waterfront Park, along the banks of the Huangpu river.

This project has been announced by the Shanghai Municipal Government as one of the key projects of the Waterfront green space infrastructure framework, and was included in the recent ‘13th Five-Year Plan’ issued by the Chinese National Development and Reform Commission as a pioneer project.