On 12 September, the research institute Deltares started building the new wave test facility Delta flume at their premises in Delft. The new facility is unique as far as size and test features are concerned.

The new Delta Flume will be completed in November 2013 and replaces the existing flume at the other test location of Deltares in Markenesse.

Ballast Nedam Infra is building the Delta Flume. MTS System Corp (USA) is responsible for the construction of the wave generator.

Bigger waves
The flume of the new facility will be 300 m long, 9,5 m deep and 5 m wide. Worldwide it will not be the longest one (Forschungszentrum Küste, Hannover, Germany has a flume of 309 m) , but it will be world’s deepest.

This allows the significant wave heights to be bigger, up to 2.2 m.

Single and double crested waves
MTS will install its most powerful wave generator ever build, enabling Deltares to experiment with both regular and irregular waves. 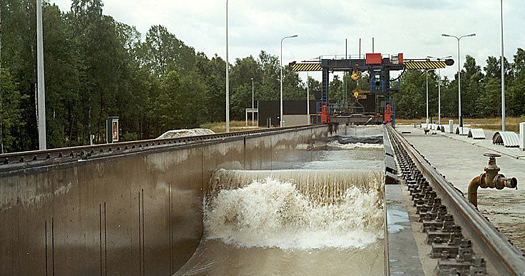