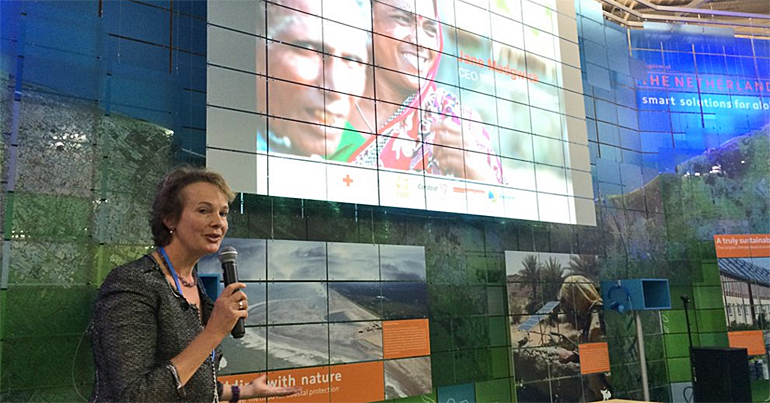 The signing ceremony took place in the Dutch pavilion at the climate summit COP21 in Paris, France on 2 December. 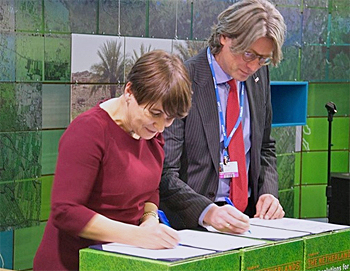 Official signing by minister Lilianne Ploumen (left) and Juriaan Lahr of Partners for Resilience at the climate summit COP21 in Paris.

Resilience to natural hazards
They focus on the role of ecosystems in disaster risk reduction and the wider landscape, including river basins, as well as managing changing extremes and rising uncertainties in a changing climate.

An essential element of the partnership is bringing information about local risks and local solutions into planning processes and investment decisions at the national, regional and international level.

Risk-based water management schemes
"For example, there is a need to ensure that large water and coastal-zone management schemes, including infrastructure, become more risk-informed", said Climate Centre Director Maarten van Aalst of the Climate centre on the occasion. "Such risk-informed schemes should adhere to environmental requirements, and consider the needs of all stakeholders, including communities downstream".

"Equally, it’s also about enhancing early warning systems, making the best use of climate information across timescales, and ensuring that such warnings are followed by early action on the ground, rather than waiting for disasters to happen", Van Aalst added.

Chief executive officer Jane Madgwick (on top photo) of Wetlands International mentioned the double role of eco-based solutions, like wetlands, in the climate debate. They address both climate mitigation as well as climate adaptation.

Restoration of coastal mangrove forests for instance, does not only help to reduce CO2 levels, but such forests also act as flood defences. 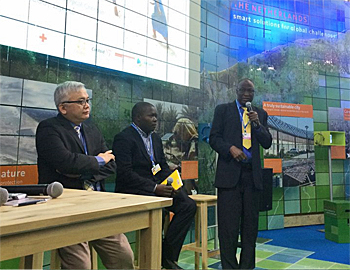 It is expected to help address the needs of the nearly 634 million people who live in at-risk coastal areas just a few meters above existing sea levels, as well as those living in areas at risk of droughts and floods.

The world is now experiencing a strong El Niño event, which could place as many as 4.7 million people at risk from drought in the Pacific alone.

Over the next five years, the A2R initiative is set to mobilize financing and knowledge, create and operationalize partnerships at scale, help coordinate activities to help reach tangible results, catalyse research, and develop new tools.