COP22: Provision of beehives as a way to decentralise climate adaptation funds 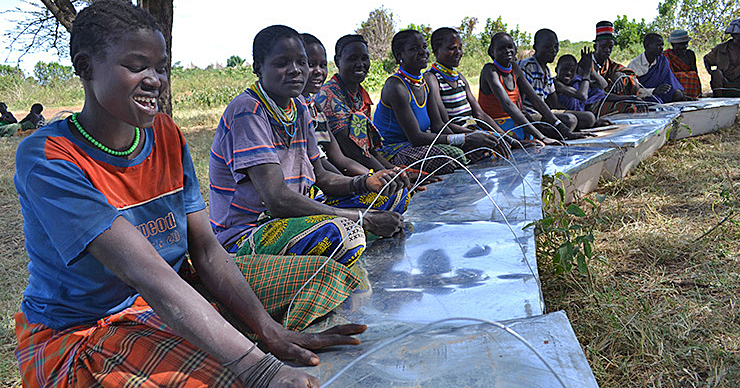 Give the communities in the Ugandan district of Hakapiripirit beehives so they can slowly convert their income from livestock farming to selling honey. Less livestock decreases the grazing of grassland and trees, thus combating desertification and preserving water resources.

This example was provided by Isaac Kabongo at the Holland pavilion at the UN’s COP22 climate summit in Marrakesh, Morocco.

Kabongo works for a climate adaptation project in the Hakapiripirit district that is supported by Dutch-based alliance Partners for Resilience. 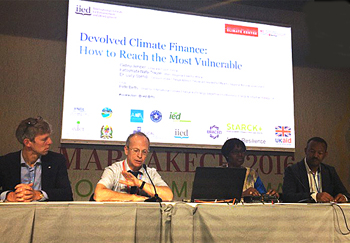 Maarten van Aalst (left) participating in the panel during the IFRC-IIED session on devolved climate finance at COP22 in Marrakesh.

Decentralisation of global climate funds
One of the key issues at the UN´s COP22 climate summit in Marrakesh, Morocco, concerned the huge climate adaptation funds and the way to make these funds available particularly for the most vulnerable, mostly poor, people in disaster prone areas.

At the Paris climate conference (COP21) in 2015, developed countries reconfirmed to mobilize100 billion US dollar per year from 2020 to 2025 to support low-carbon growth and climate resilience in developing countries.

“Development banks are talking here about ways to channel the money from these climate funds to the local level”, says director Maarten van Aalst at the Red Cross/Red Crescent Climate Centre, based in the Hague, the Netherlands.

The Partners for resilience alliance tries to break away from the vicious circle of poverty and vulnerability.

Broadening financing schemes
At the COP22 Van Aalst participated in a session on devolved climate finance organised by the International institute for environment and development (IIED). The session addressed the need to localize the global financial schemes, raising the question to combine the adaptation funds with the funds for developing aid and its existing structures.

According to Van Aalst climate adaptation involves much more. In the coming decades trillions of dollars will be invested in new hard and soft infrastructure worldwide. “We should use the money from these global funds to optimise the investments that reduce the negative effects of extreme weathers and to safeguard local development.” 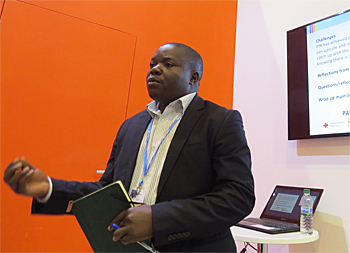 Isaac Kabongo of the Ecological Christian Organization giving his presentation at the Holland pavilion.

In kind money
Several projects supported by Partners for Resilience involve the giving away of goods to stimulate communities to become more resilient to changing patterns of extreme weather events. Next to the distrubtion of beehives, the alliance is also involved in the giving away of a sheep to people that plant five trees. In Kenya school boys are given a solar lamp – enabling them to study at home in the evening – if they nurture and appreciate the trees in their schoolyard.

About Partners for Resilience
Since 2011, Partners for Resillience, an alliance of over 60 civil society organisations in 10 developing countries has been implementing an integrated risk management approach in disaster prone areas all around the world.
in 2016 the alliance started a partnership with the Dutch government to scale up the approach by starting policy dialogues and capacity building in those 10 countries and break away from the vicious circle of poverty and vulnerability.

The aim of the aliance is to reduce the impact of natural hazards on the livelihoods of around 400,000 vulnerable people worldwide.

More information
Partners for Resilience
The Hague, the Netherlands
+31 70 445 58 86
www.partnersforresilience.nl

Report on a typical Partners for Resilience project in Kenya.