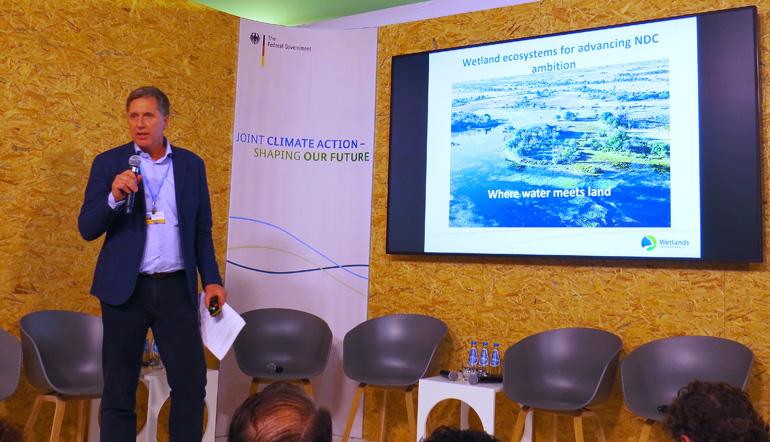 Four countries have already recognised the potential of carbon storage in their peatlands and mentioned it in their National Determined Contribution (NDC) as a mean to contribute to the 'Paris Agreement' and to decarbonise the world. These four countries are Belarus, Iceland. Indonesia and Uruguay. This was announced by Wetlands International at a session on the relevance of wetland ecosystems to raise the bar of NDC plans.

Together, all national NDC´s form the heart of the Paris agreement rulebook that outlines uniform standards for nations to set their targets, select and implement their meassures, and how this will be assessed transparently every five years.

The session on wetlands took place in the German pavilion at the climate summit COP24 in Katowice, Poland, on 7 December. 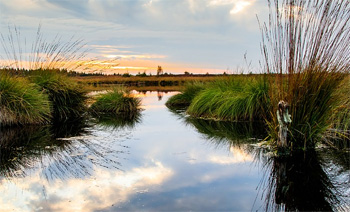 Healthy wetlands can stop subsidence, act as a sponge to prevent floods and droughts, prevent mitigation and can also contribute to the Paris Agreement to decarbonise the world.

"Half of the wetlands in the world are peatlands", said Arthur Neher (on top photo), senior technical officer at Wetlands International, "and they can absorb twice as much carbon as forests".

Neher urged the climate community to recognise peatlands as a carbon sink and fully use the potential of restoration to be included in the national climate mitigation plans as a mean to store carbon.

Greenhouse carbon balancing
However, when badly managed peatlands can be a large carbon emitter, mostly as an effect of too extensive drainage or conversion to other land use. As many wetlands are drying up, there is more emission than storage at the moment, Neher warned. 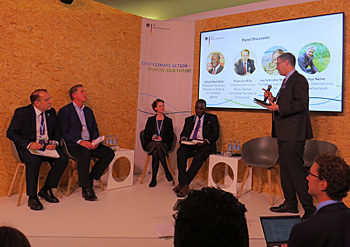 Panel leader John Matthews of AWGA (right) called up on the nature conservation and climate communities to jointly study all NCD's and 'pull out recourse strategies that are hidden in this reports'.

"The tools and mechanisms to create healthy wetlands are not sufficiently integrated in the Paris agreement", he continued. "So accounting of carbon balancing has not yet happened. What is missing are clear and transparent obligations for emissions".

Paris rulebook
According to Neher the COP24 provides a great opportunity to specify in the Paris Agreement rulebook how to account for carbon emissions and its storage in peatlands.

"It is high time to move on as it is obvious that peatlands can play an important role in climate mitigation actions. It is low hanging fruit".

Align strategies
Neher recognised that the countries that want to include peatlands in their National Determined Contribution (NDC) plans shall first need to align their practises, strategies and goals.

"We know the value of wetland but we also need a guidance at the highest level on how to create healthy wetlands that absorb carbon, instead of emit carbon. We need to merge all the multilateral agreements and conventions and to built a joint peatland declaration", Neher advocated. 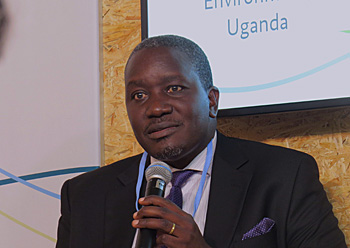 Uganda minister Alfred Okot Okidi of Water and Environment told that healthy wetlands is a big topic in his country because, although covering only 10 percent of the land, they are considered crucially important for the national food supply and the local livelihoods of people.

NDC-plans
In total some 180 countries have already filled their NDC-plans at the Bonn office of the United Nations. Added up, all reports give a good impression of the global action on reducing carbon emissions. Some countries are already working on an update.

Forests have been part of the climate talks right from the beginning for their ability to store carbon. Peatlands are less known for their carbon storage capability.

Wetlands International calls for more countries with peatlands to use this capability to decarbonise the world and include the potential in their national NDC-plans, like already more common for forests.

Non-for-profit organisation Wetlands International plead at the COP24 in Katowice, Poland to add peatland conservation as a mean of decarbonisation.