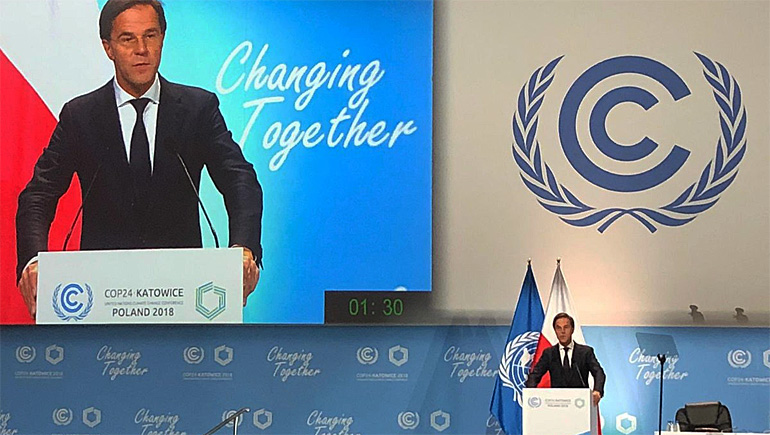 "The urgency of fighting and adapting to climate change has in no way diminished. And neither has the undeniable fact that climate change affects us all", said Dutch Prime Minister Mark Rutte at the opening of the COP24 climate conference on 3 December, in Katowice, Poland.

Saturday 8 December, is Urban Day and prominent Dutch speakers will participate in an international forum on urban climate adaptation.

Prime Minister Rutte (on top photo) announced a special 160 million euro fund for climate and development to help developing countries to become more resilient. The Dutch Fund for Climate and Development (DFCD) can be used, for instance, to grow salt-tolerant crops or to raise levees.

High on the agenda of the Dutch delegation at the COP24 is urban climate adaptation in cities. 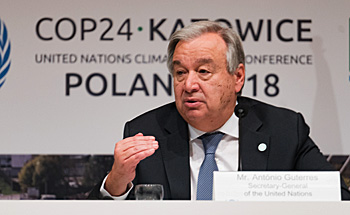 At the grand opening Secretary-General António Guterres urged the world to step up on climate action, according to a solid plan, with more funding, as a smart investment in the future of the planet. (Photo: Flickr/COP24)

Recapture spirit of Paris
"Here in Katowice we must recapture the spirit of Paris", urged Dutch Prime Minister Rutte. He called on delegates to make a serious attempt to limit the temperature rise to 1.5 degrees. Climate adaptation has become a normal thing  to do for the Netherlands, as it has been protecting itself from floods for centuries now.

Since 2011 the country follows an adaptive water management strategy that includes an annual review of all planned flood protection schemes, and if necessary, reprioritise them or add new ones.

Recent studies on the increased melting of land ice on Antarctica has caused concern in the Netherlands as this will lead to a faster raising of sea levels than currently anticipated and the national flood protection scheme may have to be revised.

As climate mitigation holds the best cards to prevent the melting of the ice caps, the Dutch government is, more than ever, eager to contribute to the reduction of CO2-emissions. 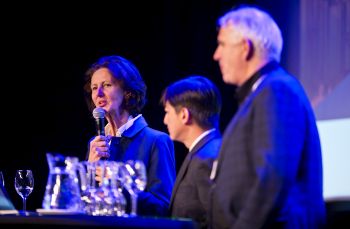 Urban Day
The Dutch delegation at COP24 also has urban climate adaptation high on its agenda. Saturday 8 December, is Urban Day and prominent Dutch speakers, such as Special water envoy Henk Ovink and CEO Patrick Verkooijen of the Global Center of Adaptation will participate in an international forum together with Polish, French and other European counterparts.

The session on Urban Climate Change Adaptation will show how cities have developed networks and share experiences. The latest example is the 44MPA programme by the 44 largest Polish cities that have jointly developed a climate adaptation scheme for their cities.

More green-blue infrastructure
Also on the agenda is the collaboration of the Polish city of Wroclaw and the Dutch cities of Breda and Zwolle. The three cities will sign an Letter of Intent to help each other on speeding up the introduction of more blue-green infrastructure in cities.

This cooperation is a first step towards establishing a broader European Urban Water Partnership (EUWP). 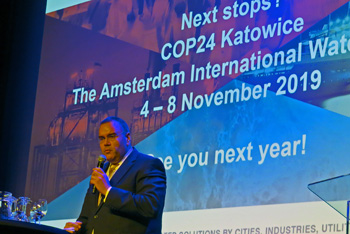 More cities to join
"City to City learning is a key stepping stone to accelerate the transition of cities towards Water-Wise Cities", said president Mrs. Diane D’Arras, of International Water Association (IWA). D’Arras advocated more cross-pollination of experiences and lessons learned, as "learning between networks and the exposure of cities to these experiences is still limited".

IWA facilitates the development of a common language amongst water professionals and provides tools such as the IWA Principles for Water-Wise Cities.

Unique catalyst
Another initiative to be highlighted at COP24 on city-to-city learning, is the Cities Leadership Forum of the Amsterdam International Water Week (AIWW). "Last month, we have identified area’s for immediate improvement", mentioned AIWW-chairman Menno Holterman who strongly believes in a circular economy as a unique catalyst.

Holterman: "The circular economy is a unique opportunity to combine innovative, smart and nature-based solutions to inspire delta’s, cities, utilities, industries, financial institutions and insurance companies for a holistic approach and appeals to a much stronger dialogue and social inclusion of water consumers, citizens and all other stakeholders."

Stay tuned as this website will keep you posted on more developments at the COP24.