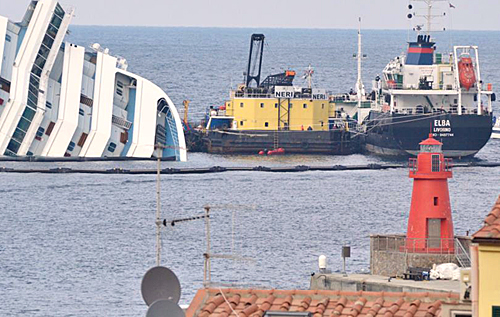 Operations to pump thousands of potentially hazardous fuel from the tanks of the shipwrecked Costa Concordia began on February 12. Two weeks ago the crew of Smit Salvage/Boskalis had to stop the defueling operation when rough seas forced the company to disconnect the crane barge from the ship wreck.

Defueling may take one month
The emptying of 15 of the Concordia's fuel tanks where most of the ship's roughly 2,400 tons of fuel are stored, may require as long as a month, officials said.

The Concordia ran aground near Giglio, a small island off Italy's western coast, on January 13, after veering off its official course. The process of emptying the ship's tanks was originally scheduled to start soon after the end of the search for the missing people.

Forward tanks first
The initial operation focused on the forward fuel tanks. Four of the six tanks had already been installed with a sealable flange during the first defueling attempt late January. As operations continue, the remaining tanks will also be prepared.

Weather looking good
According to Smit/Boskalis the weather forecast for the coming days looks good and pumping will continue around the clock as long as the favorable conditions continue.