19-year-old Boyan Slat, former student at the Delft University of Technology, managed to raise 2 million dollars with crowdfunding for building a prototype to clean up oceans from floating plastic garbage.

Slat launched the Ocean Cleanup campaign in June. The amount of money raised, published online on the campaign website, passed the targeted 2 million dollars on 10 September. 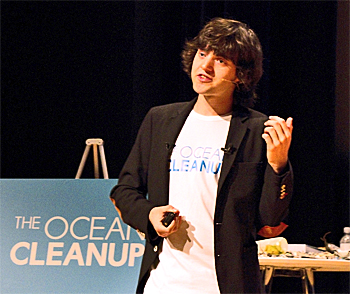 More plastic bags than fish
In the past few decades, millions of tons of plastics have entered the oceans, damaging ecosystems and entering food chains. "I first became aware of the plastic pollution problem when diving in Greece, coming across more plastic bags than fish. Unfortunately, the plastic does not go away by itself. Hence I wondered; Why can’t we clean this up?" explains Boyan Slat, who then founded The Ocean Cleanup Foundation.

Feasibility and experiments
Slat revealed his plan to build a prototype in New York in June. Previously he had expressed his commitment for a great ocean cleanup in a TEDxDelft lecture.

But after that, he took 19 months to test the feasibility of his plan with numerous experts and also to perform some experiments in the Azores.

His approach features a 100 kilometres long screen of about 1 meter deep that is anchored in one of the five ocean gyres where plastic waste accumulates.

Slat can now built a prototype, which he expects to collect half of the floating waste from a gyre in about ten year's time.

Plastic to accumulate against screen
Slat’s concept uses the natural ocean currents and winds to passively transport plastic towards a collection platform.

The water movement of the ocean gyre, plastic will accumulate against the screen and especially in the central angle of the screen. There the  density will be so large that the waste can easily be lifted out into a large floating container.

Instead of using nets and vessels to remove the plastic from the water, the solid floating barrier makes entanglement of sea life impossible.

Introduction of the Ocean Cleanup campaign.