Ship builder Damen has delivered a Cutter Suction Dredger 450 to dredging company Vesirakennus Ojanen Oy in Finland. The new dredger was delivered in only a few weeks from stock and has been put to work straight away in the Port of Pori, where it is dredging at a depth of 4.5 metres.

This is the first time a Damen cutter suction dredger has been deployed in the Scandinavian market. 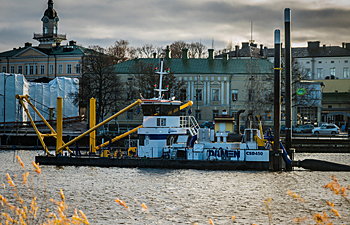 Within a few weeks the ordered CSD450 was operational for dredging the port of Pori, Finland.

Regional breakthrough
Product director Olivier Marcus at Damen is delighted with the regional breakthrough. ‘Scandinavia is traditionally a ‘backhoe market’, where pontoons with cranes are used and the dredged material is loaded into barges.’

Marcus mentions the advantage of the cutter suction dredger over a backhoe dredger. ‘Our Damen CSD450 can dredge up to 14 metres deep, offering Vesirakennus Ojanen Oy the advantage that it has continuous production via the CSD’s pipeline to the designated disposal areas.’

Available from stock
A major reason Vesirakennus Ojanen Oy chose a Damen CSD450 was because it was available directly from stock and could be delivered in just a few weeks.

Owner and director Sami Ojanen saw the CSD450 as the perfect fit . ‘The increased pumping distance provided by the new dredger also enables us to expand the range of the projects we can carry out.’

“We have also been surprised’, Ojanen added, ‘by the production potential of the CSD450 and its fuel efficiency per cubic inch. In addition to that, the CSD’s ease of operation was a deciding factor as well.’ 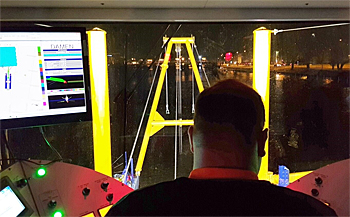 A special feature was the lighting, allowing the dredger to be operated in the dark.

Customised version
Damen also holds several optional extras in stock. The Vesirakennus Ojanen Oy dredger was customised with a day accommodation unit added beneath the control cabin with a capacity for four people.

The Finnish company also decided to add the option of an anchor boom system.

Another option included is a ‘navigation package’ (signal lights, deck lights and search lights). This is very important for a country like Finland, which only gets a few hours of daylight in the winter.

To be able to dredge in shallow waters the dredger is also delivered with a wedge piece, which can be placed between the cutter unit and cutter ladder to guarantee the right angle of the cutter.

This news item was originally published on the website of Damen Shipyard Group.

Animated visualisation of how Damen’s CSD450 dredger is operated.