The InvaSave technology for port based treatment of ballast water, entered the final phase of certification being tested on board of the 800TEU container vessel Henrike Schepers.

This final shipboard test phase was announced by its developer Damen Shipyards Group on 20 January.

Damen offers InvaSave as a containerized technology that can be placed on board of a lorry or a service barge.

The first service barge with a InvaSave treatment unit is planned to be operated in the Dutch ports of Delfzijl and Eemshaven. 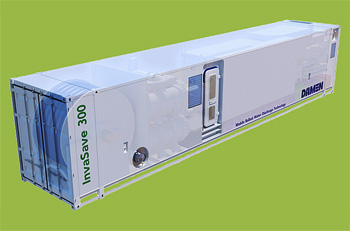 InvaSave inside a standard 40 ft container with a capacity to treat 300 m3 ballast water per hour.

Integrated water technologies
InvaSave combines fine filtration and ultra violet disinfection. Sludge and sediment is dewatered and compacted in a secondary treatment so it can be further processed safely ashore.

Each container unit handles 300 m3/h – and can easily be scaled up, using multiple units.

A vessel needing to discharge its ballast water can connect to the InvaSave unit, which then processes the water and discharges it in the port in compliance with the IMO D2 standard. 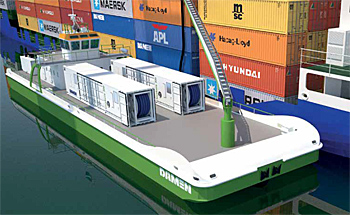 Impression of the barge for the port based service as will become available in the Dutch ports of Delfzijl and Eemshaven soon.

One step treatment
Manager ballast water treatment, Gert-Jan Oude Egberink of Damen says, “InvaSave is the world’s first and only technology on the market today to treat ballast water at discharge in only one step."

Oude Egberink foresees that not all ship owners want to retrofit an on board treatment system. "The ships may operate on non-exempted fixed routes or they are so old as to make any investment in such a system prohibitively expensive."

Therefore a port-based ballast water treatment can be an alternative, Oude Egberink explains.

This news item was originally published on the website of Damen Shipyard Group.