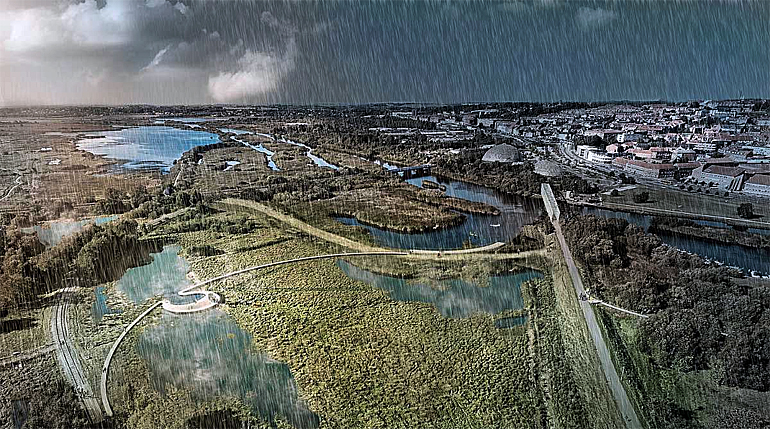 Danish architect firm C.F. Møller Landscape leads an international team to design a new landscape along the Guden and Randers Fjord that protects the city of Randers from floods, both from storm water from the city itself, as well as from storm surge through the fjord that connects the city to the Kattegat Strait.

In the next four month the team, involving the Dutch firm De Urbanisten, is challenged to come up with a toolbox with new solutions that do not create new barriers to water and nature.

On the initial call from the Randers city, 13 teams responded of which two have now been selected to develop a tool box for solutions. The other team is led by urban development consultancy SLA. The team includes the Dutch engineering firm Witteveen+Bos. 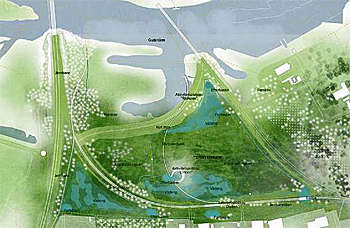 At the hearth of the plan is the reconstruction of an existing nature area into a park that can act as a water retention area.

No high levees
‘The two teams must show how we can protect the city of Randers from a storm surge, without building high levees, walls and embankments, but instead by creating better access to the water’, says Nels Markussen who is the head of Nature and Environment of Randers Municipality.

‘The River Guden and Randers Fjord are really important to the city's identity, and adaptation to climate change must not take us further away from the water. That would not be compatible with the vision of bringing the city to the water’, he adds.

Attractive solutions
During the period, the two teams will meet 4 times in Randers to look at the area, exchange ideas and give each other feedback.

According to Markussen it is important that local professionals and selected stakeholders can also comment on the ideas, ensuring that the final toolbox will be adjusted to local conditions.

‘It is important that any investments in adapting to climate change give the largest possible value to the city’, explains Markussen.

‘For us, it is all about finding solutions that we can appreciate every day, and not just if a storm surge strikes. Such solutions should be attractive to the citizens, and in this way we get more from the investments that are required.’ 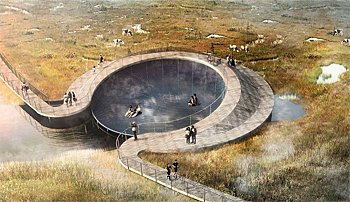 Planned iconic feature of the park that is located along the Guden river and very close to the city centre.

International expertise
Mia Rix, project manager for the Climate Ribbon at Randers Municipality, is very pleased with the international interest: ‘It is really good for the project and for Randers, because it gives us access to the latest technologies and experience from Europe that we can then build on’.

Rix adds: ‘and it of course shows that it is not just us facing this challenge. This is something that many cities, both Danish and European, will be working with in the years ahead’.
Both selected teams have Dutch participants, and according to Mia Rix, Holland is an important place to look to for experience when it comes to water.

‘Large areas there are very low, and this means that the Dutch have been working to protect their cities from water for many years. Lessons learned from this process can now be put to good use in Randers’.

This news item was originally published on the websites of C.F. Møller Landscape and city of Randers (in Danish only).