The Dutch city of Tiel opened a new water square designed by De Urbanisten on 8 July. The square has been designed to solve urban water issues, such as flood, high groundwater and the need for water storage.

Additionally the square, situated next to a primary school, has been designed to be a vivid place to play and linger.

The new square shows many similar features as the Benthemplein water square in Rotterdam, also designed by De Urbanisten. 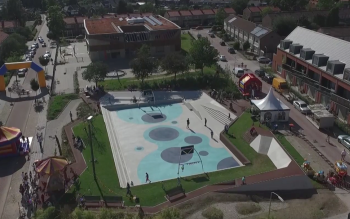 Aerial view of the water square with its double function: a playground and a 500 m3 storm water basin.

Sequence of water basins
In the middle of the square, a sports field, is also the largest basin for the storage of rainwater. The landscape with height variations creates a sequence of smaller basins for transportation, extra water storage and infiltration.

With its various slopes and heights, the landscape invites children and adults to use it for a wide range of activities. A generous amount of green surfaces frame this landscape and invite to relax and linger.

Involvement of school kids
In the design process, children from the adjacent school participated. The school kids were challenged to draw 'a snake'. By cutting and pasting they could select their favorite activities for the square.

Based on their preferences, De Urbanisten gave all parts of the landscape a different shape and possible use: a natural playscape, an archipelago playground, a skate basin and a sports field. 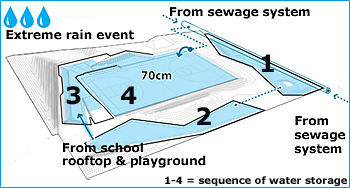 Depending on the intensity of the rain fall the four basins are filled with water.

Different stage of water storage
With a regular rainfall, only water from the school is brought to the small basins where it can infiltrate, thanks to a raingarden and permeable paving.

The central basin only floods during extreme cloudbursts or longer periods of extreme rainfall. It is filled with rainwater from the water sewage of the surrounding streets. It’s also the overflow for the undeep basins.

Ultimately, when the water stress period is over, the water is conducted back to the rainwater sewage system.

Second distinctive water square
The new water square in Tiel has the same distinctive features as the Benthemplein in Rotterdam, that was also designed by De Urbanisten.

The design of that price winning water square was also the outcome of an intense participatory trajectory with the local community, involving the neighborhood and students from nearby schools.

This news item was originally published on the website of De Urbanisten.
(top photo by Jan Bouwhuis)