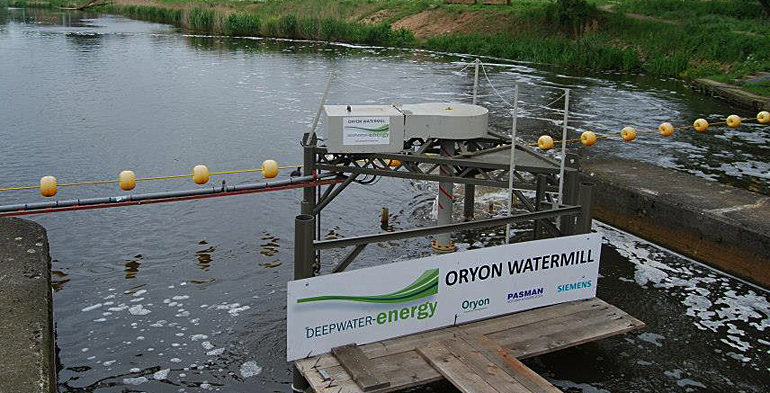 Deep Water Energy is about to install its first underwater hydropower Oryon Watermill on the Suriname River, near the village of Duwatra. The 30 kW off-grid power station will generate enough electricity to support the inhabitants of a total of three villages.

Installation is planned for July this year and, once fully operational, it will be passed on to the local population to replace the current polluting diesel generators. 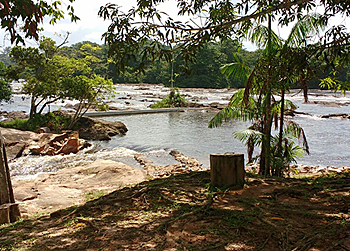 The selected location on the Suriname river.

The talks led to the choice of an off-grid location and recently the Netherlands Enterprise Agency (RVO) decided to support the project financially.

Increase of electrical output
The Oryon Watermill is an underwater construction consisting of a housing that directs the flow of the river water to a turbine.

The water pushes the turnable blades on one of the three wings that are connected to a vertical axis.

A special funnel shaped housing can accelerate the river water up to 80 percent, increasing the electrical output. 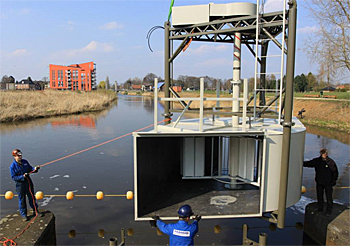 Lowering of the Oryon Watermill at the demonstration location at Ulft, the Netherlands in 2014.

Demonstration
DWE placed its first Oryon Watermill in the forced water of a weir at Ulft, the Netherlands, in 2014. Here the fish-friendliness and the actual power generation were tested.

This installation also served as demonstration location for interested parties to observe the performance of the watermill. The location has been visited by delegations from the Philippines and Suriname.

Growing interest
Dolf Pasman and Jaap Ory see a growing interest for their watermill all over the world: “We receive new requests for information and quotations almost on a daily basis.”

They realise these requests will not lead into orders straight away. “We are talking about long and complicated processes. But this year we expect first substantial orders”, said Pasman and Ory.

This news item was originally published on the website of Deep Water Energy.

Video presentation on the functioning and the numerous applications of the Oryon Watermill.

Testing of the Oryon Watermill on its fish-friendliness and constant and high return in Ulft, the Netherlands.